“Send them back where they came from!”

I met a man a long time ago, a wise and smart man, a man of ideas and principle. He was a Jew and came from a family with a name still recognizable to many around the world. I had the honour of spending some time alone with him and got to talk about what made him tick (there’s a pun in there for anyone who knows who I’m taking about). It was during that conversation I first heard the name Oscar Schindler and began to understand the esteem that name is held in, and why.

This man left Germany in the thirties, so I imagine one might be able to describe him as a refugee. He settled in America, lived a long and fruitful life and he affected positively many thousands of people. Myself included.

It galls me when I hear people here using the word, the wrong word, the word much of the media uses, migrant, to refer to people currently running for their lives from war. These people are refugees pure and simple. We should be offering help, we should be showing compassion to other people’s husbands, wives, brothers, sisters, children and grandchildren. We should be treating them as we would hope others would treat us and ours were the situation reversed.

refugee
[ref-yoo-jee, ref-yoo-jee]
noun
1. a person who flees for refuge or safety, especially to a foreign country, as in time of political upheaval, war, etc.
2.political refugee.
Origin
1675-85; French réfugié, past participle of réfugier to take refuge.

Every single one of us Brits here in Spain is a migrant, without exception. We moved here, quite legally, for a myriad of our own reasons, be that work, business, quality of life or even something so simple as the weather or the food. To use the word migrant compares the plight of these refugees to whatever our selfish motives were for relocating ourselves to Spain. It’s wrong. It’s very, very wrong. The word migrant is being used to somehow make the unacceptable sound acceptable, to turn victims into something far more sinister in the eyes of idiots.

Right now I’m ashamed of my country, the UK government, most of Europe, and I’m especially ashamed of the racist expats I see and hear every day. Their attitude to me is pretty much the definition of ignorance.

If you’re one of those people, I challenge you to put down the Daily Mail, turn off the BBC or Sky News and look at these photographs (click here or on the image below). Picture these kids as your children or beloved grandchildren. If you feel nothing you really aren’t fit to breathe the same air as me or the victims of this horrible and barbaric war. Hang your head in shame and hope your world never crumbles around you. 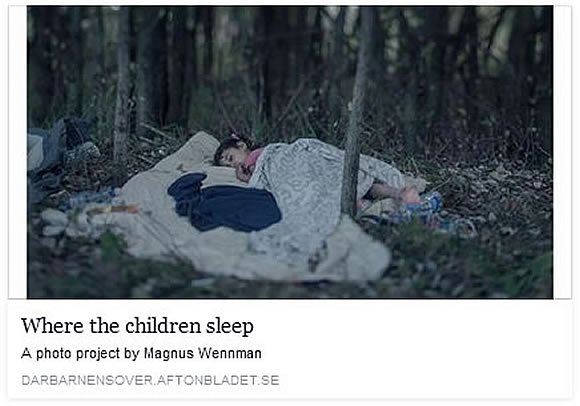 It will continue to get worse until the silent majority shut down the bigots, including those in government.