Escape from La Pared is the latest of Tom Tremayne’s adventures. This time, he takes us to Fuerteventura, one of the eight main Canary Islands. Enjoy his tale, we did! 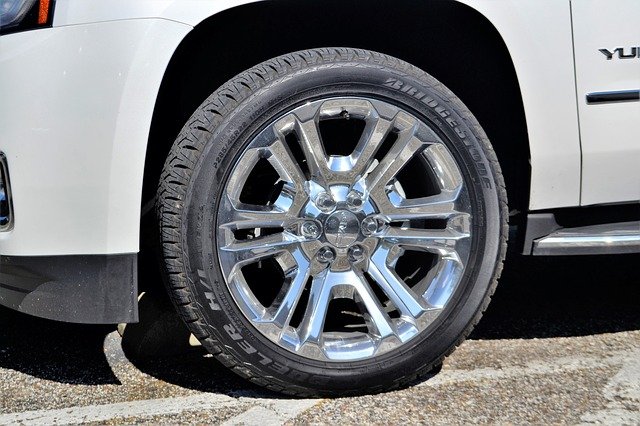 I’d spent the previous day taking a ferry to neighbouring Lanzarote and the day before that I’d spent time with ‘JP’; a nice chap who’s lived on Fuerteventura vlogging about it on a YouTube channel for many years. On a previous holiday I’d taken a bus, travelling all the way from Corralejo to Morro Jable where I’d shared lunch with the Barbary squirrels that scavenge in the sun. Today, however, I’d planned a trip along the island’s west coast in search of the rocky beach-come-cove they call ‘La Pared’. 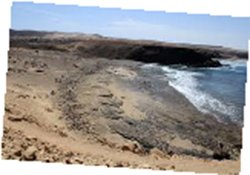 As usual I’d hired a car with local firm, ‘Orlando’ and unlocking the little silver Renault, clutching my map, towel and bottle of water, I adjusted the seat ready for my expedition. I’d plotted a route in black felt-tip pen and half an hour later I was way out west, hurtling along the FV-605 in search of ’La Pared’. Initially I drove past my turning, but seeing another hire car heading down a track marked ‘Playa del Viejo Reyes’ (‘Beach of the Old Kings’) I followed and went to look around. The beach was spectacular but like all Fuerteventura’s south-west coastline it was stony and wild. It was a hot day so I had coffee at a beach-side shack and went for a swim before returning to the car.

As the road wound on, with the time approaching 2pm, I decided to head back to my resort. I’d take the FV-2 and turn my journey in to a round trip and passing more beach-side turnings, I found myself heading inland. I passed the occasional camper van where someone was clearly living, then some banana palms and when the road eventually veered left and navigating by instinct, I took a bend towards a long, straight stretch of road which I hoped would take me home. Had I have carried on I think I’d probably found the FV-2 but after a couple of kilometres, remembering petrol, I decided I was heading too far south, towards Costa Calma and beyond. I needed to be facing north so there-and-then decided to do a U-turn, going back the way I’d come, via Betancuria. 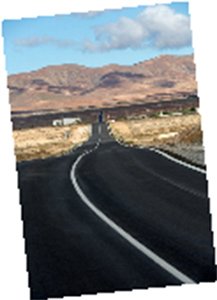 The road was totally clear, laid out like a long narrow table cloth. I tucked in at the roadside and started a three-point turn. Pulling the steering wheel from lock-to-lock and looking over my right shoulder, I saw, on the miraged surface some way off on the horizon, a small dot representing a car coming my way. As I squared-up, still with plenty of time, I felt safe in the car’s clean, climate-controlled cabin but with the tarmac turning to sand I knew I’d mis-judged the manoeuvre. The gearbox was tricky, selecting reverse needed a careful lift of the shifter but back I rolled and bringing things round I glanced to my right to see that the car that had previously been a dot, was now bearing down on me. I needed a second or two to pull away and revving the engine, I decided he was much too close. I hesitated, then stopped as he now swerved my front end without slowing. As he did this, and angry that the driver had made me panic, I mouthed something from inside the car. My window was shut, it was meant as a passing comment, half-directed at myself but also at him for hogging the open road. “Alright, give me a chance!” I think I said before finally driving off.

Once straightened-up and accelerating I checked my mirror and to my horror noticed that the other car, which I now knew was a beaten-up, white jeep, had stopped and was making its own three-point turn! I continued to accelerate, 30 and then 40kph, but there he was, in my direction and firmly on my tail. Thoughts riffled through my head – I’m a tourist, clearly in a hire car, perhaps he needed to come this way anyhow, maybe he’s forgotten something? Like a scene from Steven Spielberg’s ‘Duel’ there he was, filling my rear window, flashing his lights, sounding his horn and now gesturing at me through the windscreen. I contemplated driving to the next village. If I keep going, I can sort this out – there’ll be people around, maybe he’ll give up the pursuit, maybe he’ll swerve round me again and speed off up the high street. I could see the driver’s face now and he was pointing left, indicating that I should pull-over. He was trying to show me something on his shirt or in his hand and it was then, looking at the long clear stretch of road ahead and remembering that I hadn’t actually seen a village in miles, that I decided to stop to see what he wanted.

With a sandy bump I pulled on to the hard shoulder and behind me, the jeep did likewise. His door flew open and out got a portly man with bare arms and in a light blue polo shirt and jeans. As he marched towards my car I noticed a motif on the front of the shirt. Now I saw another motif on his shoulder but at no point, looking at that old jeep did I see anything written on it – not on the bonnet, not on the roof and not on the doors. Suddenly it all made sense, below one of the motifs were the words ‘Policia Local’. With him shouting something and gestured at me to open my window, I still felt unsure; there was no proper uniform to speak of, just jeans, trainers and a polo shirt. To be honest he looked as if he’d spent all morning in a bar and that he’d bought the jeep second-hand somewhere but I decided, cautiously, to comply, opening the window a fraction to better hear what he was saying.

Not used to the car’s electrics and in my panic, I opened the passenger side window instead of the one on our side. The barking of orders now turned to rage and as I changed buttons to open the driver’s-side window I must have slightly rocked the switch, for no sooner did it start to come down, the window started to go up again. Twice more I did this, down a few inches and then immediately up again. It was a due to panic, a genuine mix-up but seeing it as deliberate and when the window rested in the up position longer than he wanted, the guy drew a baton from some sort of belt-hook on his jeans. To my astonishment he now hit the window, luckily the baton skidded across the toughened glass as he carried on yelling in Spanish. Again the window came down and went up. It was like the television sketch where the comedian pretends to be talking to the audience through a car window that’s going up-and-down. There were snippets of rantings and I think the front windscreen now took a rap from the baton! “If he breaks that glass I’ve lost my deposit!” I thought to myself and eventually, getting the window to stay down I listened as the tirade continued. Now…my Spanish is pretty good but every word and command had deserted me – I couldn’t even think of the word for ‘sorry’ and instead I said ‘hombre’ which I’m sure didn’t help. Apologising in English was all I could do, him saying something in Spanish to which he added “stupid English people!” and with that he turned, marched off and with a final three-point turn, left me in the dust.

I was badly shaken, the window luckily wasn’t damaged but my confidence was. I needed a drink – a coffee, a return to civilisation and feeling like I’d been dragged through the desert on a rope, I selected first gear and pulled away. “Never uttering another word on a Spanish road again” a little voice in my head announced, “and certainly not on a back road! My 50km ride home would be a slow and deliberate one. 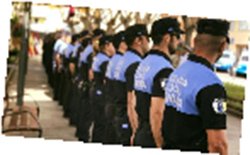 Back in my hotel room I fired up my laptop and found a webpage for the ‘Policia Local Fuerteventura’. It had sections showing all the divisions and a link which took me to a Facebook page for the Morro Jable contingent in Costa Calma. I clicked on a few photos and there he was, the same guy, same blue shirt, receiving some sort of award and looking at his surname I realised it was shared by several other officers as well. I further googled ‘Policia Local’ and ‘Structure of Spanish Police’ and found some interesting comments suggesting that the Policia Local often act with impunity, a law unto themselves, and that they’re much less professional than Spain’s primary police force, the Guardia Civil. Whilst I‘m sure the Policia Local do do some good work, someone else had commented that in places, historically, the Guardia Civil had held them in contempt. I’d seen first-hand, how, in southern Fuerteventura at least, they’re not to be messed with.

I’m usually polite and I guess the moral of this story is to be careful in your hire car and don’t take anything for granted. Realise that the ‘Policia Local’ might be out on a Sunday lunchtime in dusty, unmarked jeeps and if you see them keep calm. The trouble is, if you see them, you may not know it’s them so perhaps be courteous on the roads anyway. Never lose your cool and familiarise yourself in advance with all electric window switches!

Tom Tremayne is a freelance writer formally based in Barcelona. He now alternates between the UK, Spain and Lanzarote and can be contacted via tomtremayne@yahoo.com.

He also produces and edits short promotional videos and documentaries, extracts of which can be seen at www.tomtremayne.com

Tom Tremayne is a freelance writer formally based in Barcelona. He now alternates between the UK, Spain and Lanzarote and can be contacted via tomtremayne@yahoo.com. He also produces and edits short promotional videos and documentaries, extracts of which can be seen at www.tomtremayne.com