A couple of years ago I saw a picture on Facebook of the ‘Cofradia dolls’ (not sure if that’s the correct name, but it’s what we call them) from a shop window in Seville, or it might have been Granada, or it might have been Madrid, not that the location is that important. It was accompanied by a propped up note written in English that read “Not the KKK!”. 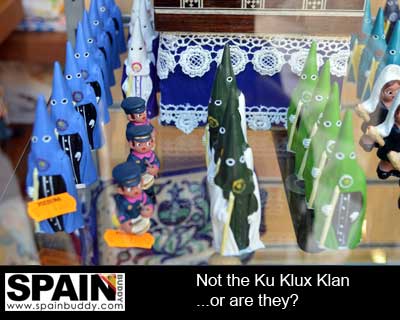 I imagine that some tourist had walked in off the street and complained about the racist implications of such dolls. Hence the title of this article, found in the form of a question on Yahoo Answers, I think someone has got their chronology a little mixed up.

Since seeing that photo I’ve been curious as to the links, if there are any, between the Holy Week Brotherhood costumes and the Klan so decided to have a poke around.

A quick search doesn’t really turn up any definitive evidence of a link, but it does pop up a few suggestions that the fancy dress costumes of the Klan have their origins in the Semana Santa regalia.

The similarity between the capirote is more than a little obvious. In historical terms the capirote dates back to medieval times times, a very long time ago – even older than my Dad; the Klan are a relatively new phenomenon dating back to only 1865, thus confirming that the Klan dress like Catholics rather than the other way around.. Make no mistake though, despite the similarity in appearance, the symbolism is quite different. However, as an expat I do find it somewhat unsettling seeing kids walking around in pointy hats once a year. 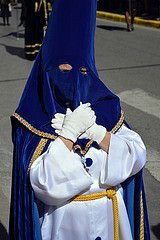 According to the KKK of the Western Mass. Chapter themselves…

“The original meaning of the robe and hood comes from ancient European rituals meaning fraternal brotherhood and anonymity in doing good works.”

I won’t link for obvious reasons but a quick search on Google using the term “origins of KKK uniform” will turn up the site if you really must see it.

“The origins of the use of the costume are unclear. Such garments have been traditionally used in festivities such as Holy Week, symbolizing the act of penance. In Spain and its former territories, which included parts of the United States.”

This leaves me wondering. Does this mean the Klan nicked the pointy hat look from their olive skinned ‘Mexican’ non-Arian cousins, who I presume they hate as much as they hate everyone else who isn’t just like them? Now that would be an irony.