The many weird foods of Spain have always fascinated me. You only know what you know – so anything out of the norm can be a little disconcerting. Here we look at just a few. 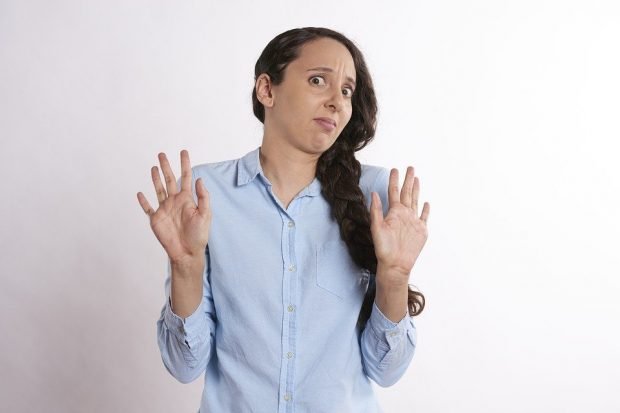 I (and many others) was brought up to always eat whatever was in front of me – never wasting a thing. “There are children starving in Africa” was a common phrase at my childhood dinner table – so it has frustrated me when hearing about parents laughing when describing little Johnny with, “He’ll only eat chicken nuggets and pizza”. Really? Start as you mean to go on. As long as genuine food intolerances are taken care of – then do encourage your children to try new things. For one thing, it encourages a balanced diet and increases the number of places you can visit with your little ones.

Of course you can’t expect your children to try new things if you’re not prepared to give new things a go too. Lead by example. Go on – you may just be surprised!

Some of these dishes are available anywhere in Spain, whereas you may have to go a little rural for others. Some are variations on dishes that no longer seem to be widely available where you live… while others are enjoying a resurgence of popularity.

Renowned chefs will often talk about “zero waste” and they’re right! It keeps their costs down for a start, but also it gives the middle finger to what has been a rather wasteful society for some time. More than one of these recipes uses what some may view as “waste”. Don’t be put off – there’s flavour to be had.

Anyway – my waffle has gone on long enough – onto the food! Vegetarians and vegans look away now – there’s not much for you to find here. 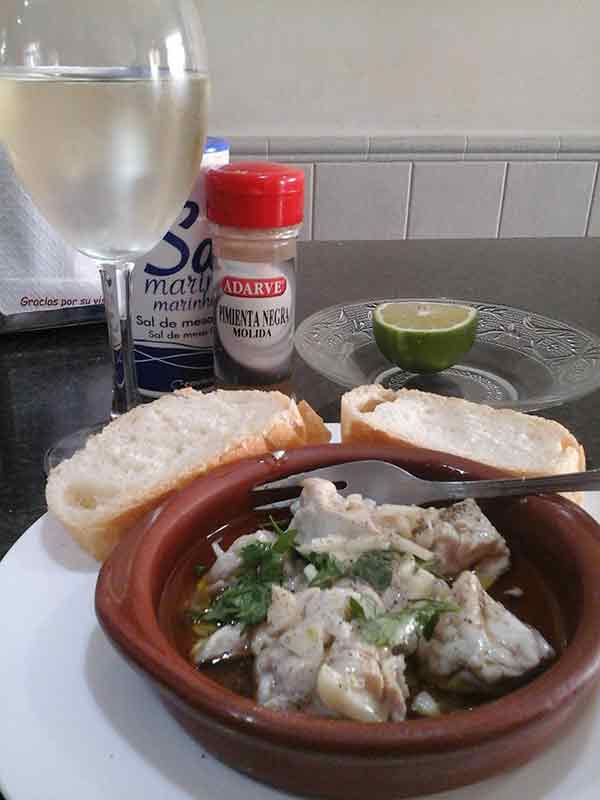 This was a rather recent addition to my diet. I still don’t see it widely available in Spain – but do seek out those bars that cook “Abuela” food – and you should come up trumps.

The dish pictured shows pig “sesos” that are boiled and then served cold. Squeeze a little lemon juice and crack some black pepper on top. The texture can be a shock to some – I can only describe it as a little like a firm blancmange. The brains themselves didn’t seem to taste of much – but the lemon and pepper livened them up. The jury is still out for me on this one – but I’d be interested to hear of other recipes using sesos.

I have these in Bar Loli in Vélez-Blanco, a very traditional bar that will take you back a few decades and is one of my favourite places to frequent.  Loli (the owner) also serves most of the dishes mentioned in this article. I get text messages from friends in there whenever something new appears that they want me to try. Apparently I’m a rather unusual Brit with my “give it a bash” attitude and an  entertaining change from the looks of horror and disgust they have seen from many in the past (including from hubby). 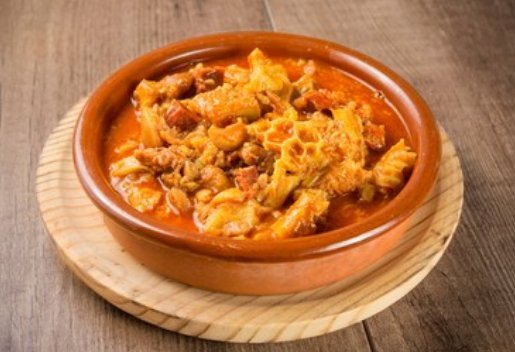 I remember the stench of tripe cooking as a child – and for that reason, I’ll never prepare it at home. But when you see callos available in a bar – give it a go! Usually callos is served in a spicy sauce, and sometimes with some onion and chickpeas to bulk it out.

Never ever ever ever ever be tempted to buy the tinned nonsense you’ll see in Spanish supermarkets. This dish needs to be cooked slowly and lovingly prepared by a cook/chef that knows what they are doing. When you get a good plate of callos – the taste sensation is fabulous!

The best Callos I’ve had was a seriously peppery version served at Los Tintos in Granada city. Aside from that dish being fabulous… it’s also a damn good bar with a great range of wines and super hosts! 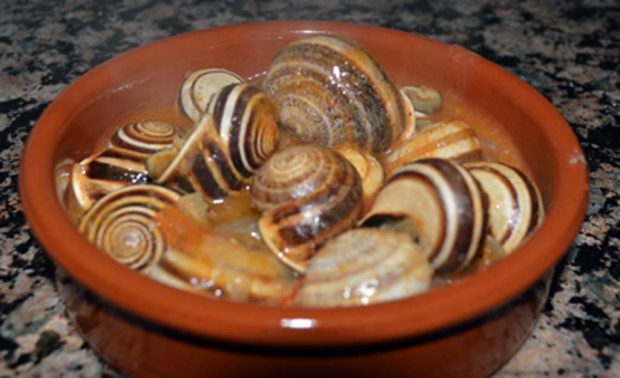 I was brought up eating “winkles” – little seashells filled with a salty critter. I have happy memories of sitting on Ryde pier with my Mum… a pot of winkles in my hand and a pin to pull out the little gems. So I was more than happy to give their land-based cousins a go. Like the French “escargos,” the flavour doesn’t come from the snails themselves… but from whatever they’re served in. Often in Spain, these are served in a spicy sauce known as “escabeche”. Make sure you have plenty of bread at hand to mop up the sauce – but then of course this is Spain… so there’s always plenty of bread.

The best caracoles I ever had were from a seafront eatery in Playa Honda on the Canary Island of Lanzarote. But these are also easy enough to prepare at home. Here’s a tried and tested recipe for anyone who fancies a go. Don’t be tempted to use snails from your garden unless you KNOW they are fit for human consumption. 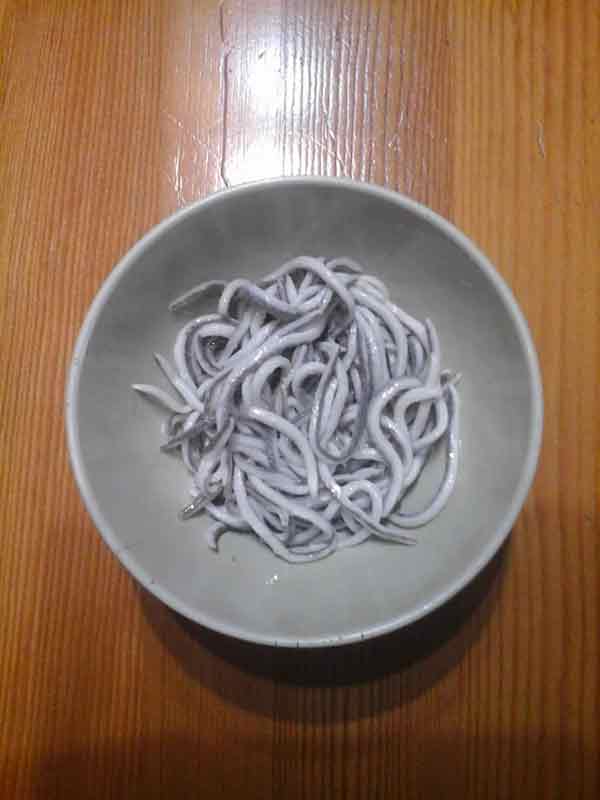 Unless you’re rich – then what you will be served in a bar won’t actually be baby eels. The real ones (often found in the Basque country) can cost up to €1000 per kilo… out of the price range of most of us.

The alternative is usually described or labelled as “sashimi angulas” and is made from reconstituted fish. Think about “crab sticks” which are aren’t actually made of crab but taste similar.

If you have a Coviran supermarket near you – these have been on offer at €1 per tin for some time – find them with the other tinned fish products such as sardines, mussels and cockles.

I love these. They taste (to me anyway), and have the texture of, stripped crab sticks. Lovely with a squirt of lemon juice and some cracked black pepper. Or a dash of vinegar instead of the lemon juice works really well too. Eat these babies cold. 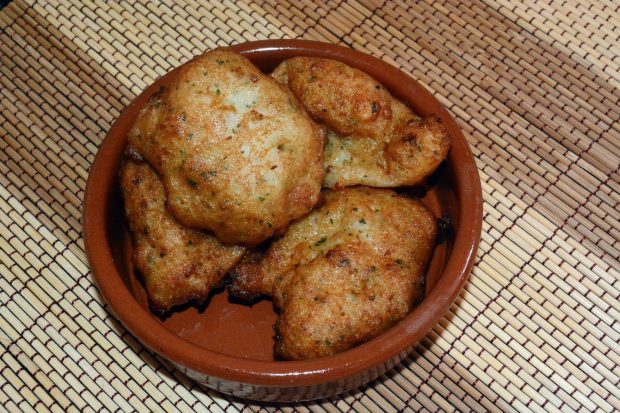 Despite what the name suggests… this dish’s main ingredient isn’t actually egg. It basically consists of stale bread soaked in milk that is then deep fried.

It harks back to poorer times when we made the most of cheaper, more readily available, ingredients.

Although the main ingredients don’t have much in the way of flavour – these “huevos tontos” are livened up with added parsley, salt and pepper. They are very filling and best served as a side dish. Most people wouldn’t wan a plate of them.

It’s a messy dish to prepare, but if you fancy giving it a go – here’s the recipe for you. 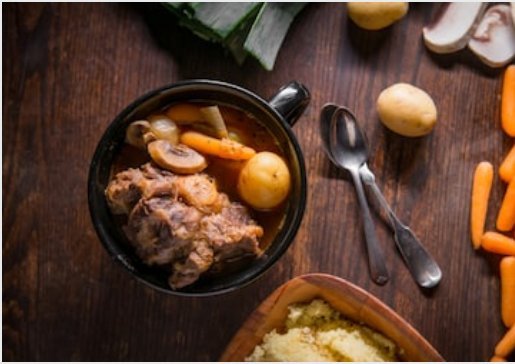 This one isn’t actually as weird as it may sound. If you’ve ever eaten ox tail – then this isn’t a million miles away from that.

Slow cook this part of the bull and serve it in its juicy sauce/gravy. Again – you must have plenty of bread to hand to mop up all the juices.

Traditionally the tail is given to the chap who slaughtered the bull in the ring. But of course as anti-bullfighting brigade, we’re not doing that. Luckily you don’t have to torment a poor animal in a bullring for hours before enjoying this succulent dish. 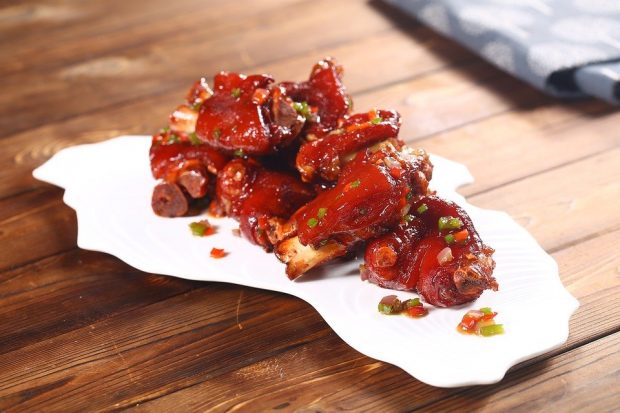 This was something that my dearly departed Granfy ate a lot when I was a child. The trotters were just boiled and he ate them with just a sprinkle of white pepper.

I did try them back then and was disgusted! They were served whole, had a slimy texture and tasted of… well… pretty much nothing. I just didn’t see the point of staring at a pigs’ toenails while eating.

Since moving to Spain though… and developing that “I’ll give it a go” attitude, I’ve had some amazing pigs’ trotters. My favourite – consistently – have to be from Bar Pepe in Oría. Oría is off the beaten track in Almería and Bar Pepe even more so. But my God their trotters are good! Actually – all of the tapas at bar pepe are good and the prices are fantastic. Take your best Spanish phrasebook with you though! 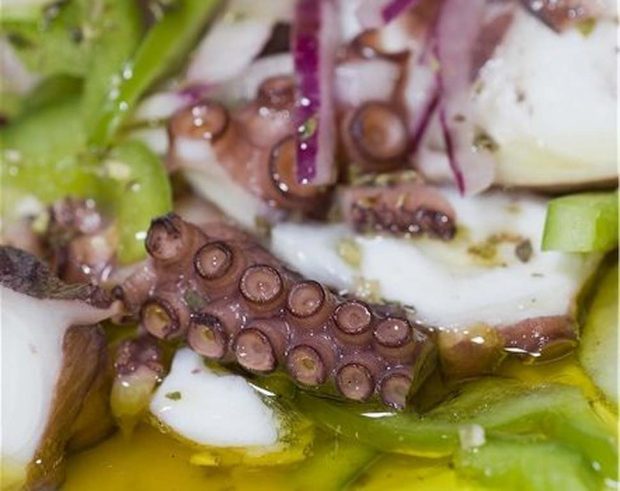 While I, and many others, don’t find this weird in the slightest… the reactions of fellow Brits to these juicy morsels ensured that I included them on the list.

There are dozens of ways to prepare octopus – but for me they are best flash-cooked on a plancha and served with a vinagrette dressing.

By far, my favourite place to eat these are at La Taberna in the Rubicon Marina of Playa Blanca in Lanzarote.

Pulpo is also very easy to cook at home (if a little time-consuming to prepare). Here’s one of my favourite recipes. Be sure to buy your pulpo fresh – it makes all the difference!

Have you tried any of these dishes? What did you think? Are there any weird and wonderful foods from Spain that we’ve missed out? Leave us a comment below.