We were recently sent some books about walking in Spain with an invitation to review them, and received five of the Cicerone walking guides from various regions around Spain. 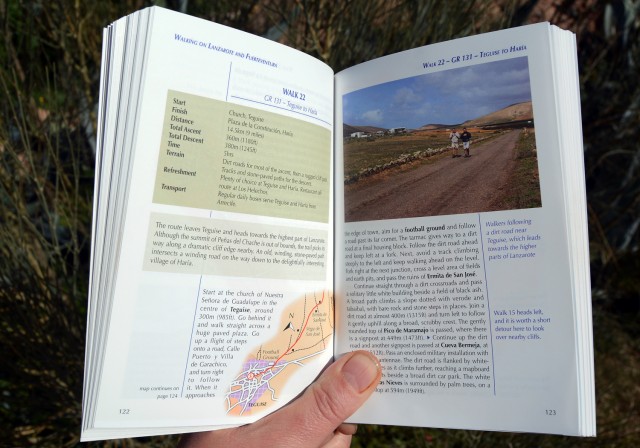 When you have finished reading this article, you will no doubt want to enter the latest Spain Buddy competition. Click HERE for that.

Now, I’m not one to give glowing reviews if they are unwarranted. In this case that’s not a concern because these guides are really well presented and well written. Obviously I can’t vouch for the absolute accuracy of all five books, but I think in the case of the Lanzarote I can speak with some authority having done one or two of the walks described, sort of done some in part, and I know the island pretty well after the six years we spent living there.

I’m no stranger to the odd ‘stroll’ (I walked the length of the Canary islands back in 2012, unknowingly following fairly closely a couple of routes in the guides). I’m personally not one to plan in detail – all I need to know (choose to know) is my destination and a map. I’m not the typical ‘walking guide’ buyer. However, if I were, I would definitely invest in the Cicerone walking guides above others, although I’d probably not be inclined to trot around with them proudly under my arm like Michael Portillo with his ‘Bradshaws’. Instead at 17cm x 11.5cm I’d have it neatly tucked away in the side pocket of my rucksack where it would fit quite comfortably (top tip from me: whilst the laminated cover does provide some protection from water I highly recommend resealable freezer bags for small water sensitive items).

The books are thorough enough for the average walker’s needs, without going into unnecessary detail. Each route starts with a summary including distance, total ascent and total descent, estimated time, a description of the terrain, level of difficulty, and helpful suggestions for refreshment stops and public transport availability. The route descriptions are through enough that you shouldn’t lose your way and very easy to follow, so much so that I’d be bold enough to say you’d be able to follow them even without the excellent maps and photographs that are also included in the books.

If I had to rate them out of ten, I’d give them a nine. My ONLY problem with the books was the size of the typography – I can’t read it in low light. To be fair though, that’s my problem isn’t it? Perhaps it’s time for my irregular visit to the opticians! And anyway, I’d rather carry a small magnifying glass than the books be twice the size or twice as thick – the size, weight and information ratio of the guides is spot on as they are for ‘normal’ vision.

Here’s the titles we’ve looked at so far….

Walking in Andalucia
by Guy Hunter-Watts
Guidebook to 36 walks in Andalucia. The Sierra Nevada regions of Aracena, Grazalema, Los Alcornocales and Gaucin, La Axarquia, the Alpujarras and Cazorla each have 6 day walks. Most of the walking routes are circular and range from 5 to 21km, are graded for difficulty, and many are suitable for all walkers.

Guy lives in a small village in the mountains close to Grazalema and just west of Ronda.

He lists his favourite things about Spain as The privilege of living amongst kind, caring and decent people from whom community, family and friends still play such an important roll. He does miss some things from his former life in the UK however, notably gastro pubs, multicultural entertainment, the deep cosmopolitanism of the UK, art cinemas and misty autumnal mornings.

Guy has certainly integrated into his new home country and most of his friends are Spanish now. He spends his time writing, promoting his walking guides, organising guided walks and he also lets out two houses for part of the year. You can find out more about Guy via his website at www.guyhunterwatts.com

Walking on the Costa Blanca
by Terry Fletcher
A collection of 50 circular walks and scrambles that explore the Costa Blanca mountains, around the resorts of Alicante, Benidorm and Calp, a popular European winter sun adventure destination. From 1,500m peaks and knife edge ridges to deep gorges, the walks range from gentle strolls to demanding days with steep climbs, and from 3-20km in distance.

Terry Fletcher has walked and climbed among the mountains of the Costa Blanca for more than 30 years. His love of wild places has taken him all over Europe and North America, where he has a particular fascination for the sandstone canyonlands and deserts of the American South West.

As a full time professional writer and photographer for more than 40 years, his work has appeared in almost every national newspaper as well as specialist magazines. He has also appeared on network television and radio as a commentator on the outdoors. He is a former editor of Cumbria and Lake District Magazine, Dalesman and The Countryman.

Although Terry loves in the Yorkshire Dales in the heart of the  UK, he has been walking and rock climbing on the Costa Blanca for the last 30 years, as well as in Catalunya and the mountains of the Costa del Sol. He spent the last two winters based in the Calpe area working on his book  donig more than 60 walks before settling on the final 50 which he decided to include.

Many of Terry’s walks were done alone, which he freely admits is not the smartest thing to do in mountains where it is still possible to walk all day and not bump into another soul. (Try doing that in the Lake District!)  However, Calpe is also a popular destination for UK walkers so he did have a revolving cast of friends to accompany him at times. They were also kind enough to share some of their favourite walks and introduce him to new areas, which added immensely to the breadth and scope of the book. 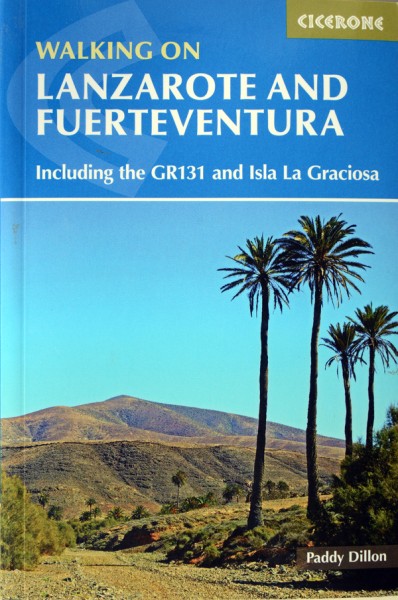 Walking on Tenerife
by Paddy Dillon
Guidebook covering the best walks to be found on the island of Tenerife. The 45 routes range from simple day walks, to long distance trails along the GR131, and hiking routes on El Teide. Tenerife, the largest of the Canary Islands, boasts walking routes of many types, set in stunning natural scenery.

Paddy has travelled extensively, writing and illustrating thousands of magazine articles, contributing to almost every outdoor title over the years.

He has written and illustrated more than 70 guidebooks, covering walking areas and long-distance trails, with contributions to 30 more publications.

Paddy’s travels have allowed him to explore an incredible range of landscapes, ranging from coast to high mountains, semi-deserts to arctic ice sheets, lush green forests to farms and fields, all explored while enjoying anything from short strolls to arduous long-distance treks. Wherever he walks, Paddy takes copious notes and plenty of pictures, ready for rapid publication after returning home.

Paddy has also led groups of intrepid walkers all over the world covering areas including the Sierra Nevada to Nepal and Tibert, and the Canadian Rockies to the Loire Valley and the Black Forest.

While Paddy’s travels can take him anywhere, home is on the fringes of the delectable English Lake District, which is visited through the changing seasons, in all kinds of weather.

You can find out more about Paddy by visiting his website at www.paddydillon.co.uk

Spain’s Sendero Histórico: The GR1 Northern Spain – Picos to the Mediterranean
by John Hayes
Guidebook to the 1250km of Spain’s Sendero Historico (GR1), traversing northern Spain from Puerto de Tarna in the province of Leon in the west to the Mediterranean near L’Escala in Catalonia, through fascinating, varied landscapes and the foothills of the Pyrenees. Described in 53 stages, about 25km each in length, with detailed mapping.

John doesn’t live in Spain although he is a regular visitor. He spends most of his time most of my time either planning his next adventure, doing it or writing about it.

John says, “It’s a great place to walk. The scenery, the weather, the footpaths and the food and accommodation combine to provide an experience which is unique to Spain.”

John speaks fondly of the cuisine in Spain, naming his favourites as anything including morcilla, broad bean omelette, Iberico jamon, salt cod and oranges, and he loves Spanish cheese.

If he could change one thing for his trips to Spain it would be the accommodation. He explains that key to his style of walking is enough accommodation.  “Lots of the country bars and small hotels have closed – it would be great if a these could stay open,” said John.

Since retiring from full time work five years ago John has been walking all over the world.  He owns two properties in the UK and has time to travel now – something he says wouldn’t change even if he won the Euromillones. Included in his travels have been many visits to Spain which he has now crossed several times.  One of his adventures has resulted in The GR1 Spain’s Sendero Histórico, the first English language guide to arguably Spain’s best walks.

You can find out more about John and his adventures via his website at www.johnhayeswalks.com

The Cicerone guides are not only confined to Spain. This long established publisher has titles covering walking and cycling throughout the UK and all over the world. If the other areas are written as well as the Spain titles, you won’t be disappointed.

Take a look at their website at www.cicerone.co.uk or browse the catalogue HERE

Alan, along with Elle, is the owner of Spain Buddy. He was born in the North of England (Lancashire) and travelled extensively before eventually settling in Almería. Alan has 3 sons from the first of his 18 marriages, (Sam, Joe & Ben) who are all now adults. You can read more articles by Alan on his personal blog at AlanGandy.com and see more of his photography on his photography website as well as on Flickr and Instagram.
Also, for less than the price of a cup of coffee each month you can help support Alan’s photography (and get some freebies into the bargain). Click here to visit his Patreon page to find out more.