Tips on hosting a Thanksgiving dinner in Spain

“Thanksgiving dinner in Spain?” you say! Yes! Although Thanksgiving is traditionally American, Spain loves to embrace events from other countries. For example, we have seen the popularity of Christmas and Halloween increase since moving to Spain. When Spanish friends come for dinner, they invariably ask us to cook something British – so they can learn more about our food and eating habits. 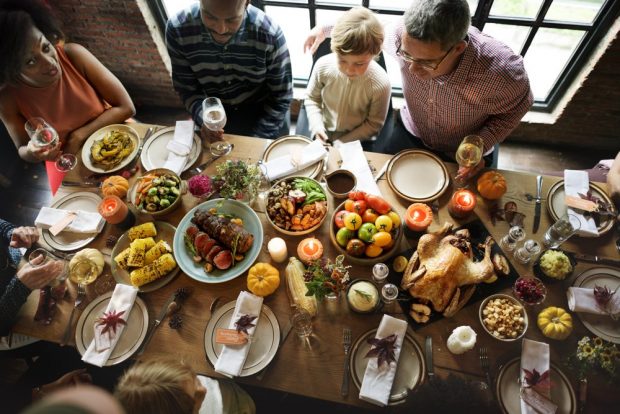 Our Spanish friends and neighbours enjoy the edible gifts we have provided for various events (or just for kicks) over the years that include such things as mulled wine and even the humble vol au vent. We share our customs and food and in return our friends have taught us much about Spanish celebrations and cuisine.

Aside from honouring God during this occasion (and for many of us, religion just isn’t our thing), the beauty of Thanksgiving lies in the joy of being with family and friends. What makes it even better is sharing a sumptuous meal with them. After all – combining family and food is very Spanish anyway – so what’s not to love?

If you’re planning to host a Thanksgiving dinner in Spain, or you have some Spanish friends that would come over for Thanksgiving, here are some information and tips that you could consider:

Add Spanish flavours to your menu

Obviously, hosting a Thanksgiving dinner in Spain requires you to have Spanish ingredients – sourcing your all-American favourites may not be possible in some parts of Spain – or is rather pricey. Spanish ingredients are not necessarily direct substitutes suitable for your all-American menu. Mixing in some Spanish flavours as an adaptation of your menu can solve this easily. For the perfect Spanish/American blend, you can try cooking the following;

Those are the main dishes that you should consider when hosting a Spanish Thanksgiving. As for the side dishes, you can try the following:

If you are still learning the Spanish language and are nervous about spending a whole evening conversing – don’t panic! Learning some basic Spanish words or phrases would cut any ice. As long as you have your Spanish/English doctionary or phrasebook to hand (and keep the food/drink coming) you’ll be fine.

Here are some Spanish words or phrases that you might find useful in conversing with your Spanish friends:

Dinner time is different in Spain.

Make sure to be specific in mentioning the time when you invite your Spanish friends to come over for Thanksgiving dinner. Dinner time in Spain usually starts well into the evening and often as late as 10pm or 11pm. Don’t be surprised if no Spanish friends arrive when you say, “Come for dinner at 4:00 pm.”

Create or find a playlist to play

When there’s music playing in the background, there would be no awkward silent moments for guests. Music of choice for dinner would be something light – perhaps even something instrumental. Aside from the fact that it’s light, most people like a little background noise. Be heedful also of your guests by including some Spanish songs on the playlists.

As a host, the guarantee of your guests’ satisfaction and comfort is your primary goal. Spanish or non-Spanish, take into account your guests preferences, beliefs, traditions, and most especially their taste and choice of food and drinks.

Prepare seasonal dishes that they would love, learn the language, and provide something that would make them feel at home. Each minute detail you add as a host would make a difference when you see that your guests are satisfied and happy with what you’ve prepared for them.