The Canaries’ first luxury lighthouse hotel has opened on the pretty island of La Palma. After three years of extensive renovation, the 152-year-old lighthouse Faro Cumplida has opened its doors for guests seeking a magical and off-the-grid experience. 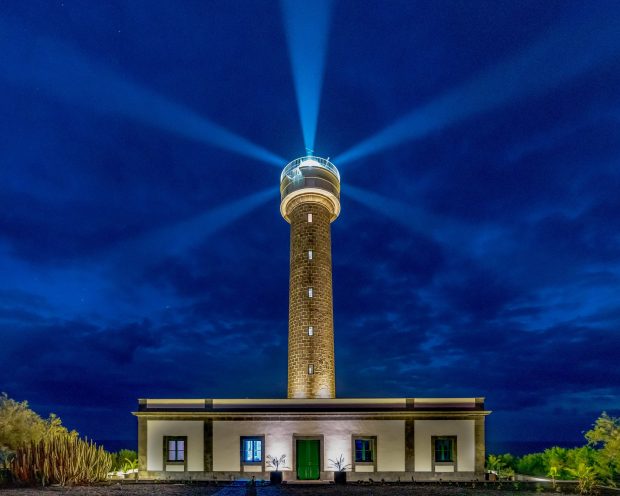 Located in one of the most beautiful corners of La Palma, Faro Cumplida sits on the most northerly part of La Palma offering undisturbed views of the Atlantic Ocean. The lighthouse which is still in nautical use, offers four luxury rooms and suites in total, accommodating up to eight guests in the light housekeeper’s house, located directly below the watchtower.

Offering a clean and modern architectural style within a historical structure, guests can appreciate the history of the building in a modern context. Facilities include four rooms, four bathrooms, a roof terrace, a dramatic infinity pool, a 36m high watchtower and Canary-Islands garden. The two suites named Farero Suite and La Palma and Atlantic Suite sleep four and two people respectively and both offer their own private terrace to appreciate the spectacular surrounds.

The traditional patio with its pergola made of local Tea Wood leads to the lighthouse entrance and the 158 steps that wind up to the top of the tower, where guests can enjoy the fantastic views of the Atlantic Ocean, the surrounding banana plantations and the lush La Palma mountains. Guests can also enjoy a glass of wine or refreshment from the Sky High Mini Bar, a rewarding treat after the climb.

A hotel with history

During World War II on 28. October 1942 a German submarine U509 sunk the British battle ship Pacific Star near the Canary Island of La Palma. After three days, the castaways spotted the light of Faro Punta Cumplida. They came onshore and managed to reach the coast of Barlovento, where the locals took the 97 sailors into their homes to save their lives.

Today, Faro Punta Cumplida is the only lighthouse in the Canary Islands which offers accommodation and is still in nautical use.

La Isla Bonita (The Pretty Island) is the most north-westerly of the Canary Islands, with a wide scenic and climatic diversity. The island is renowned for its impressive and varied landscapes, offering 706 square kilometres of lush scenery with a network of more than 1,000 kilometres of marked trails, making it the ideal hotspot for hikers and nature lovers in search of an off-the-beaten-track destination.