The beginning of the end for Ana van der Pluijm?

Some of you may recall an article we published last year about Ana van der Pluijm the estate agent who disappeared from Almería with hundreds of thousands of Euros of other people’s money, fraudulently taken as deposits on a number of properties (click here for the original article).

Hopefully her wrongdoings will now start to catch up with her after investigative journalists from Undercover in Nederland caught up with her in a show aired tonight (Sep 3) on SBS6 at 21:30. She is currently living in a town called Schoonebeek in the Netherlands.

As well as her property scams, Ana van der Pluijm (who also goes by the name of Annika Elena van der Pluijm) is pretty well known in the dog breeding world for all the wrong reasons. Running what could only really be described as as a puppy mill she has, for many years, been selling Presa Canario dogs to dog breeders all over the world at €1500 a time. Then, so we are told, she fails to provide paperwork thus rendering the dogs worthless to other breeders. Back in 2013 she took the rather extreme step of faking her own death online to throw angry victims off her scent. Since then she has been operating this ‘business’ under the pseudonym of José Juan Fernando posing as a breeder in Spain and using fake personas to cover her tracks. 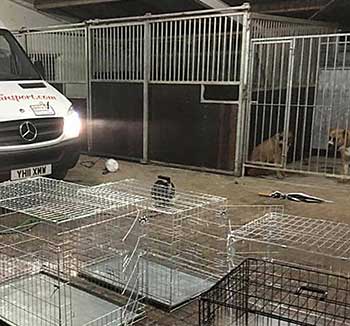 The programme’s producers were alerted to Ana van der Pluijm’s activities after the pet transport company she was using started doing a bit of digging. Ana, unsurprisingly given her reputation, wasn’t paying their bills. Through that, her dodgy dog breeding and her history of fraud here in Spain (and other places) showed up.

It turns out that after not paying rent for a year on the property she was renting at the time van der Pluijm was evicted from the house where she was living and operating from.

From there she moved to a smaller two bedroom property where she was unable to house the many dogs she was in possession of, at which point she advertised them all for sale still posing as José Juan Fernando. Having been unsuccessful selling the dogs she placed them in kennels – 15 of them! The kennels of course were not paid and the owners eventually had to resort to transporting all of the dogs to where she was living.

Due to the Presa Canario being considered a dangerous dog, and that she had nowhere to keep them, the Dutch police (having been pre-warned by the kennel owners) intervened and seized the dogs for re-homing.

Is this show the beginning of the end to Ana van der Pluijm’s illegal and amoral activities? We certainly hope so, but, being the slippery con artist she is, she’s probably packed her bags by now and will be on the run again before the show has finished.

If you have any other information on Ana van der Pluijm that you’d like to share do let us know. We’ll see it gets into the right hands (the source of this info who has been working with the producers of Undercover in Nederland).

There is an outstanding warrant for the arrest Ana van der Pluijm in Spain and her victims are currently petitioning for a European Arrest Warrant.