The real estate market in Spain is on the up and up since 2015 according to real estate editor Leigh Stewart from Tranio, an international property broker. New data by the Ministry of Development show a five-year peak in transactions, complimented by the strongest house price growth since 2007.

Residential property sales increased by 9.8% in 2015 according to Spain’s Ministry of Development, which is equivalent to approximately 33,440 signings every month. In total, 401,281 properties were sold last year, making it the highest number of transactions since 2010 and the third consecutive year of growth. 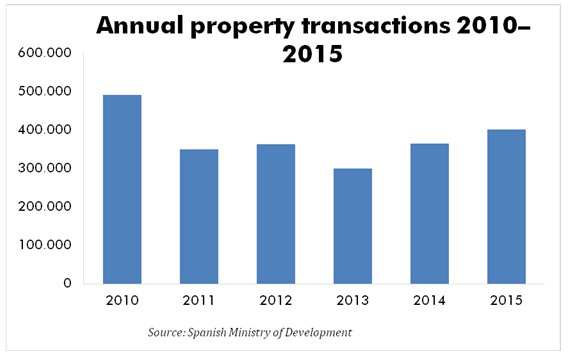 But that’s not all, the property price index also made headlines for breaking post-crisis records. House prices increased by 3.1% on average and both new and existing homes recorded new highs. Second hand property values gained 2.9% year-on-year, the strongest result since 2007, while new property gained 4.2%, the biggest increase since 2008. However, Spain’s market still has room for improvement because there were 36,000 less sales in Q4 2015 than the record Q4 2010 period.

More foreign buyers on the market

Foreign nationals bought about 17.0% of all homes between October and December 2015, amounting to 19,482 transactions in total. Amid the struggling global economic climate, Spain has benefited from a weak euro exchange rate, which makes property cheaper for those with US dollars and British pounds. Foreign buyer activity, dominated by UK citizens, has grown over the last 18 consecutive quarters year-on-year. 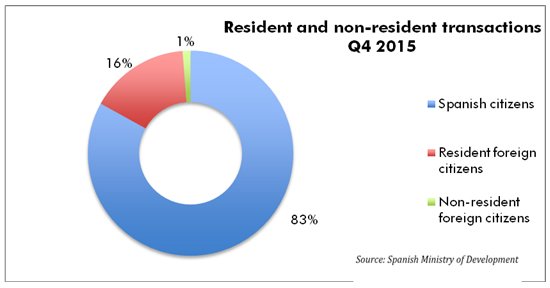 Resident and non-resident transactions grew by 9.9% and 10.3% respectively in 2015. However, resident foreign citizens clearly dominated the marketplace, snapping up 18,029 properties compared to 1,453 for non-residents. These disproportionate figures can be explained by the extent of foreign expatriation and Spain’s definition of tax residence.

According to the Association of Registrars (Colegio de Registradores), British citizens purchased one in every five properties sold to international buyers in 2015 (approximately 9,346 properties).

Foreigners are tax residents if they fulfil one of the two following clauses:

For instance, a consultant who travels regularly and only spends 130 days per year in Spain, but whose spouse and children reside there, is a tax resident because his main centre of interest is located there.

At the same time, someone who lives in Spain for more than 183 days isn’t necessarily going to be taxed. For example, the United Kingdom, like many other countries, has a bilateral agreement that exempts British citizens from double taxation.

The Balearic Islands, made up of party island Ibiza, upmarket Majorca and quiet Menorca, have some of the highest property prices in Spain, along with the Basque Country. Another competitor for best local market, Cantabria, is no doubt cashing in on the high prices in the neighbouring Basque Country where prices are much higher.

House prices and market dynamics in the North of Spain 2015 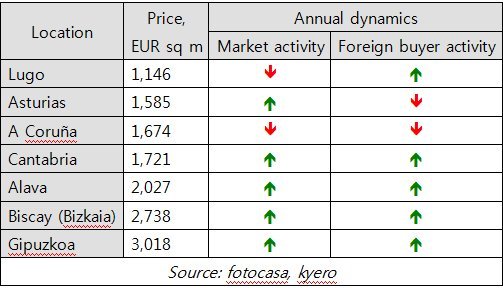 Foreign buyers are more active in the South and East of Spain, including the Balearic Islands. The distribution of foreign home ownership is mainly determined by the proximity to transport routes (e.g., airports, roads), familiarity with the area (often through tourism) and expat pioneers who have established social circles in the area. 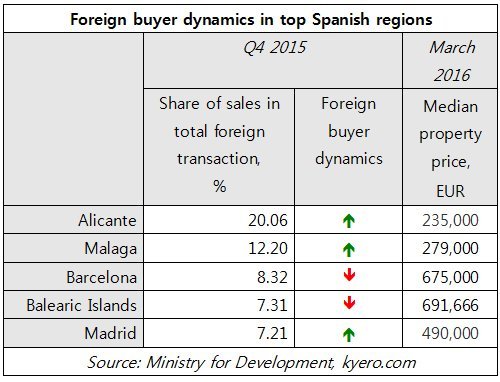 A price preference pattern has emerged from foreign activity that generally benefits areas with properties around the €250,000 mark like Alicante and Malaga for example. These destinations are also popular because of the easy low-cost air access.

Brexit is a threat to low-cost aviation that is feeding the tourism industry and the real estate market as it would jeopardise the Open Skies agreement that makes it possible for companies like Ryanair and Easyjet to operate.

Foreign currency exchange rates are a risk and an opportunity for the market. If the euro stays weak against the US dollar and the British pound is not negatively influenced by Brexit rumours, transactions should continue to grow.

Chinese investors are active buyers around the Mediterranean and will likely continue in light of their homeland’s sluggish economy, stimulated by Spain’s “golden visa” programme.