Do you have an appetite for gastronomic travel? Mr Gran Canaria Matthew Hirtes has reviewed many of the island’s leading restaurants. In the latest in an irregular series, he offers his take on Las Palmas de Gran Canaria’s Goa Gastrobar. 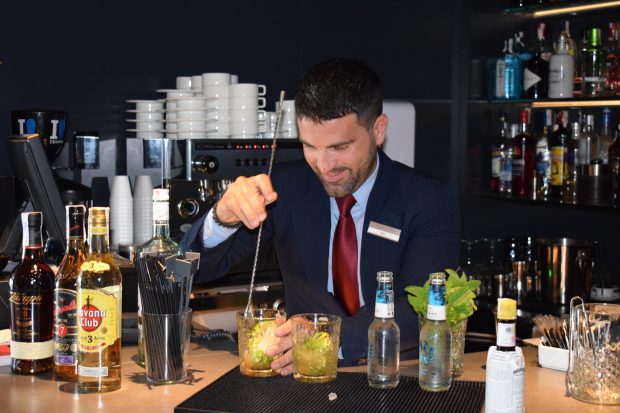 Goa Gastrobar….take five at one of the Gran Canaria capital’s freshest food openings

If you’re looking for somewhere to enjoy a quieter meal on a visit to the Gran Canaria capital, Goa Gastrobar, Hotel Silken Saaj’s in-house restaurant, is the place. Background music is conspicuous by its absence. Which certainly aids conversation, as I discovered during my lunch with the hotel’s assistant accounting manager, Viren A. Pradhan Adwani.

The wine list is largely a mix of local (as in Canary Islands) and national (mainland) vintages with the only international entries in the cava and champagne section. Canarian wines tend to be more expensive than those imported from the Iberian peninsula because of the smaller-scale production and I enjoyed reacquainting myself with a sophisticated Tajinaste seco white from Tenerife and a youthful upstart of an Agala red from Gran Canaria’s stunningly-set Bodegas Bentayga in Tejeda. My top tip though is to ask the affable maître d’, Cuba born-and-bred Raimel Montiel, to prepare you a post-meal mojito as his tried-and-trusted routine is a veritable cocktail masterclass.

There’s a cutting-edge-meets-classical Menú Ejecutivo available from Monday through to Friday 1:00pm to 3:30pm for three courses. This changes on a weekly basis but you can view past, present, and future menus on the hotel’s Instagram page. We started with some of Tenerife’s legendary small-but-perfectly formed potatoes served papas-arrugadas style by being boiled in the saltiest of waters and then accompanied surprisingly by both mojo verde (the green coriander-heavy sauce ordinarily paired with cheese or fish) and mojo rojo (the fiery cumin and paprika sparring red).
That starter wasn’t actually on the menu that week but our next course was: salmorejo con platano. Salmorejo is a traditional Andalusian soup that’s thicker and less drinkable than the similarly chilled gazpacho but shares the same core ingredients. In a nod to the Canary Islands, the Goa Gastrobar’s version incorporates banana and it’s truly an addition that makes the dish even more refreshing.
Chef Jose Carlos Romero Espino used to work with Michelin favourites the Roca brothers in Catalonia and he shares their enthusiasm for plant-based innovations plus fancy molecular gastronomy techniques such as adding nitrogen to fruits to rehydrate them. When I told him as a vegan that one of the things I missed most about my past life as a vegetarian was the famous feisty almogrote cheese paste from La Gomera, he promised to make me a dairy-free one next time I visit.

There’s a bustle to the Alcaravaneras barrio in which you’ll find Goa Gastrobar. Hotel Silken Saaj is actually on the main León y Castillo road, the thoroughfare connecting portside Parque Santa Catalina with central Triana. Yet so relaxed is the restaurant, the heart and soul of Las Palmas de Gran Canaria feels as far away as, well, a former Portuguese colony in west India.

The aforementioned Menú Ejecutivo retails at a competitively-priced 12,90€, although drinks aren’t included. The cheapest drink on the white list is a 3,80€ glass of vino de la casa and the dearest a bottle of Moet Chandon DO Francia champers for 95€. The dry Tajinaste white is 18€ a bottle and the Agala Joven red 13€.

Disclaimer: I was invited to eat at Goa Gastrobar in exchange for a review. Nevertheless, my opinion has not been bought. My verdict is as objective as if I was a paying guest.