A couple of weeks ago the telephone rang at Spain Buddy Heights. It was Jim Tickner, author of the book “Patch, His Pack and Dear Old Reg”. 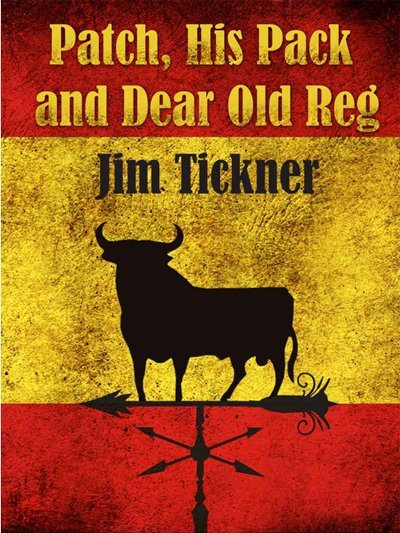 Jim hails from the south of England, and spent his time in the same areas I did before leaving the UK and heading out for sunnier climes. Jim’s wife gained a teaching job in Seville, and before you knew it, the house was packed up and they were on their way. Chris (Jim’s wife) headed out first to get settled in and start work, while Jim comleted the packing up of the house, saying emotional goodbyes to his daughters, and loading up “Reg” (the car) with their remaining belongings and Patch the dog, before heading down to Seville by road.

Here is what Jim has to say about the book, “When Jim and Chris, a disenchanted English couple searching for adventure in a foreign land, find themselves living in the “Dust Bowl” of Andalucía, they realise that life is not quite what they expected!

They stumble across armies of Solar Soldiers and the local Blu Klux Klan. They find they are living in a land where gobbledegook is considered the official local language, and Smurfs can be spotted at roundabouts, dancing gaily with buckets in their hands.

They spy battalions of Top Gun swifts and house martins flying in protective formation over a monument dedicated to the Phallus, around which cardboard-touting geriatrics perform their unceasing daily rituals of Banter and Barter.

In this Land That Time Forgot, they become unintentionally involved in bizarre religious processions, whilst temperatures soar to the high 40′s, even in Springtime, when streets lined with orange and lemon trees exude a pungent perfume, that at once intoxicates and wraps a comforting arm around you.

They wonder in amazement at what lies behind the myriad closed doors and shuttered, grilled windows of this raucous, bustling town of contradictions. The hapless pair are  astounded and discombobulated in equal measure.

I really enjoyed this book. From the start, Jim speaks about such places as Waterlooville, Whiteley and Fareham – areas I know well from my years back in Blighty… and that set us off in the right direction.

This is not a blow by blow account of Jim and Chris’ experiences as such, although the diary of events is included. This book is more about the people of Spain. It is obvious from the pages that both Jim and Chris are people watchers… and he describes people in a very comical way.

Jim doesn’t claim to be an expat that has moved out to live the dream and be fully immersed within a week of setting foot on Spanish soil – he is open and honest, self deprecating at times – and basically tells it like it is (for them at the very least). Spain IS real… it’s not always shiny… and we Expats don’t automatically turn into Spanish people only eating Spanish food and watching purely Spanish TV. There is also a period of adjustment. Some people do it quickly, some a little slower, and some not at all. I get the impression that Jim and Chris will always retain the legendary British stiff upper lip, while also enjoying what Spain has to offer – a lifestyle balanced and realistic.

Jim describes their lives in the town, their hurdles with paperwork, the adventures of “Patch” (a border collie dog in case you were wondering) and takes us on a bit of a road trip in “Reg” during the book, exploring Seville and its surrounding towns and villages, as he and Chris search for a home outside of the hustle and bustle. I am only guessing, but I think the book covers a period of less than a year. Jim can probably confirm whether that is the case.

Would I recommend this book? Absolutely. I found it as enjoyable after eight years in Spain as I think someone planning the move would do too. Jim’s descriptive is colourful and exact – and not always complimentary – but that’s okay because that’s real.

Download it today and get ready for a laugh!

Jim, we wish you and Chris well, and look forward to the second book chronicling your adventures and some more observations of Spain, it’s people, and everything else too.