The next in the series from Matthew Hirtes – Go Expat in: Moving to Seville

Like a performance of its traditional flamenco, Seville inflames the passions 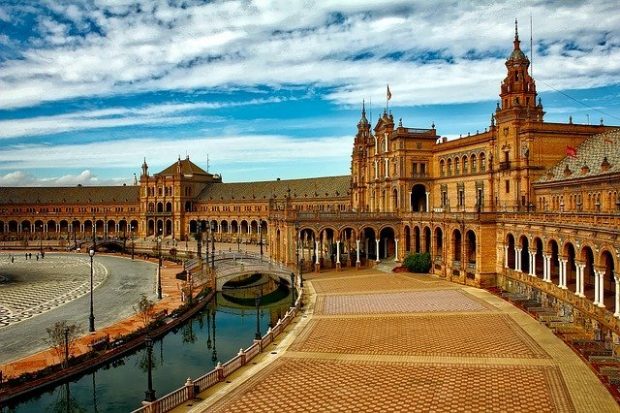 Ups
Spain’s fourth-largest metropolis has a big-city feel. More rural types will prefer living in the surrounding Andalucian countryside. Which is greener than you’d think. Especially considering the province is nicknamed “the frying pan of Spain”.

Downs
Seville is a city of extremes. Not least on the weather front. Summer can see temperatures zoom into the 50s. Whilst April sees its fair share of showers. As did March this year, with the rain playing havoc with the city’s famous Semana Santa processions.

In and out
Seville’s San Pablo airport (SVQ) is a 15-minute drive along the A-4 and the Avenida de Kansas City from the city-centre. Double that journey time for one of the regular shuttle buses that will deposit you outside the Parque de María Luisa. Get around town by bus, Metro, tram, or Shanks’ Pony. Although tourists are suckers for the horse-drawn carriages.

Education
State schools, both primaries and secondaries, across Spain are moving towards a bilingual education with subjects like science also taught in English. British schools in Andalucia tend to be located closer to the coasts, where the majority of expats live. However St George’s prepares its pupils for IGCSE and A-level exams. If you want your kids to pick up more Spanish, Colegio de San Francisco, located in Seville’s old town, belongs to the International Baccalaureate Organization.

Shop until you drop…
Prepare to get fresh in Seville’s covered markets. Here you’ll be able to pick up fish, meat, fruit, and veg. The best of the central four is arguably Triana, located in the working-class district of the same name. Cross the river from the city-centre via the Puente de Isabel II. To discover a 150-year-old Mercado built atop the Castillo de San Jorge, infamous for housing the Spanish Inquisition.

Property types
Walk through Seville and prepare for an architectural field trip. Turn one way and you could be back in Ancient Rome, another and in Al-Andaluz when this part of Spain was under North African control. Gothic, Renaissance, and Baroque buildings complete the variety pack. If you’d love to live in the centre, the Alfalfa area is one of the most affordable. This favourite of students has attracted an older, more frugal buyer in recent years.

“The heat of Seville certainly contributes to the hot nightlife and the warmth of the sevillanos. The draw of living here lies in being able to indulge in the moment whilst feeling a strong sense of the past at the same time.” Cat Gaa (Sunshine and Siestas)

” Seville is the centre of the tapas universe – these bite-sized morsels are the perfect accompaniment to an ice-cold beer, ideally suited to the climate. Bar hopping and trying one or two at each stop is a favourite night out for locals – they even have a word for it: Tapeo.” Jeremy Head (Author of the iPhone and Android app Seville Explorer)

” The outdoor life is a key attraction of residing in Seville, whether it’s your morning coffee outside the local bar, taking the kids to the park in the afternoon (or evening), having tapas with friends on a terrace in the centre at night. Everything happens “en la calle”.” Fiona Flores Watson (Scribbler in Seville)

• Are you an expat in Seville? What do you like/dislike about it? Let us know below.