A new appeal has been launched to trace and bring to justice 12 of the UK’s most wanted fugitives believed to be hiding in Spain. 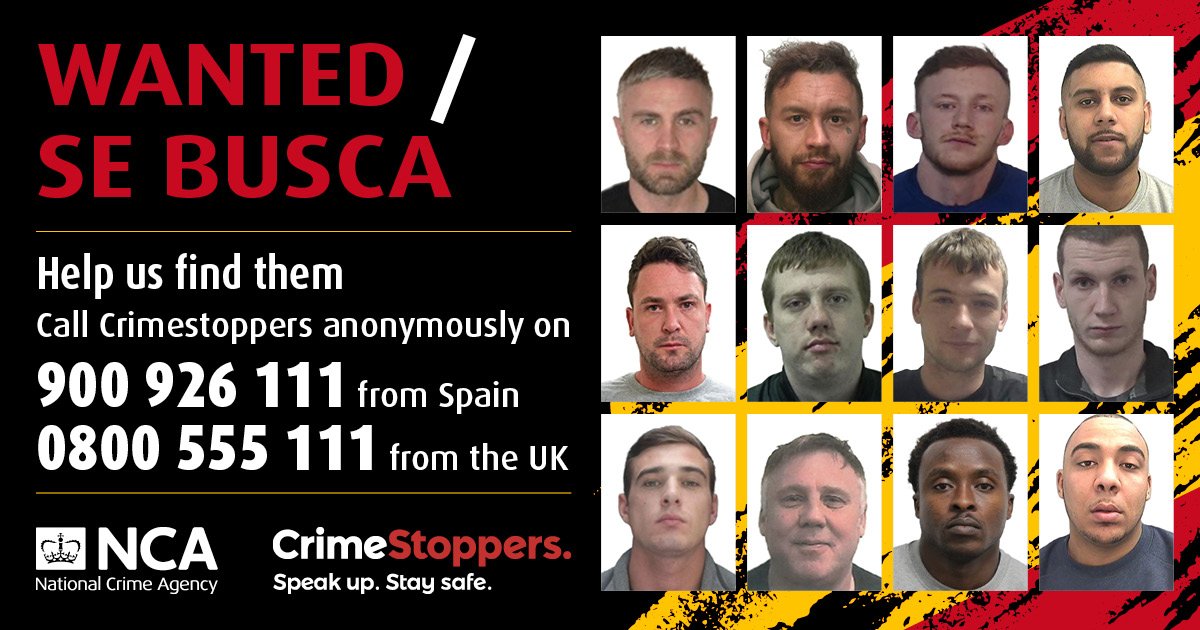 The offenders, all men, are wanted for crimes including murder, large-scale drugs trafficking and supplying firearms and ammunition.

The NCA’s Most Wanted campaign is run in conjunction with independent charity CrimeStoppers, Spanish law enforcement, UK policing and comes on the back of the extremely successful Operation Captura fugitives campaign, which resulted in the arrests of 86 offenders.

Spain is one of the most popular countries for British ex-pats and the two nations have a very strong law enforcement partnership.

Today, Steve Rodhouse the NCA’s Director General of Operations was joined by the Security Minister Rafael Pérez Ruiz of Spain’s Interior Ministry, Deputy Head of Mission Sarah Cowley and Mark Hallas, CEO of CrimeStoppers, at the campaign launch in Madrid.

Steve Rodhouse said: “Spain is not a safe haven.

“We have a brilliant relationship with the country’s various law enforcement agencies and work together daily to protect the public.

“With 86 offenders arrested in our last fugitives campaign, criminals know we will never give up and we’re never far behind them.

“Our Spanish partners were crucial to many of those arrests, and in 2021 arrested and returned more than 25 wanted UK fugitives.

“The NCA’s International Crime Bureau and International Liaison Officers work on behalf of UK policing to exchange information and intelligence with partners abroad leading to the tracing and arrests of criminals globally.

“Fugitives usually continue offending while on the run and these men will be known in criminal circles wherever they are.

“The last thing the fugitives’ associates will want is the combined determination and capabilities of the UK and Spanish law enforcement focusing on them.

“Many of these fugitives will be trying to blend in to the large British communities who have made their homes in Spain, and if you are resident, you may know one of them from your town or village.

“Loyalties change over time and we urge anyone with information about these men to help us find them.”

All the men featured on the campaign are believed to have links to mainland Spain and the Canary Islands.

Among the Most Wanted is Nana Oppong, 41. Oppong is wanted by Essex Police for the drive-by murder of grandfather Robert Powell, 50, who was shot eight times with a 9mm pistol on 13 June 2020. It is alleged that the victim and Powell were from rival criminal factions.

Also wanted is heavily tattooed Jack Mayle, 30, on suspicion of supplying Class A drug MDMA and other drugs.

Mayle is suspected of running a drug line in south London and allegedly worked with a dark web drugs supplier.

When he fled, Mayle, who is from Croydon in south London, had a tattooed neck, a diamond tattoo under his left eye and ‘Croydon’ inked on the outside of his left forearm. He may have tried to alter his appearance and is known to carry weapons.

The Most Wanted appeal also features Callum Halpin, 27, who is wanted by Greater Manchester Police for the murder of drug dealer Luke Graham, 31, and the attempted murder of Anton Verigotta.

Graham, a dad-of-two, was ambushed and shot dead in a drugs turf war in broad daylight on a street in Ashton-under-Lyne as children played nearby in June 2018. In July 2019, five men were jailed over the execution.

Muscularly built Asim Naveed, 29, and 6ft 2in tall, is accused of playing a leading role in a highly organised crime group (OCG) that trafficked 46 kilos of cocaine into Wales between February and June 2020, worth up to nearly £8m.

Calvin Parris, 32, who has gold upper teeth, is accused of being a customer of Naveed’s OCG and selling cocaine on in Cardiff.

Also, Scotsman James ‘Jamie’ Stevenson, 56, is wanted by the National Crime Agency and Police Scotland over the seizure of approximately one tonne of cocaine and 28 million Etizolam ‘street Valium’ tablets.

The cocaine was found in a shipment at the Port of Dover in September 2020 and the tablets were seized following a raid on a suspected pill factory in Kent in June 2020.

Stevenson, who is stocky and has a scar on the left side of his face, is also wanted in connection with two suspected arson attacks on properties in the Lanarkshire and Forth Valley areas in May 2020.

Lord Ashcroft, founder of the charity CrimeStoppers UK said: “We know it can be difficult for people to speak up about crime, which is why our charity is here to give you an option.

“We guarantee you’ll stay completely anonymous, just like the millions of people who have trusted our charity with their crime information since we were formed back in the 1980s.

“Please do the right thing by passing on what you know about these fugitives’ whereabouts and help us ensure these criminals are no longer a danger.”

Sarah Cowley, Deputy Head of Mission, said: “The Most Wanted campaign is just one example of the successful cooperation that takes place between British and Spanish law enforcement.

“We stand united as partners against common threats and challenges, sharing not only expertise but goals and values too. In doing so, we can make both countries safer for citizens.

“I would like to thank our Spanish colleagues in the National Police and the Guardia Civil for their role in this campaign and for their ongoing collaboration in the face of common challenges more broadly. I would also like to thank the Spanish and British public for their help, as without them the Most Wanted campaign would not be possible.”

Rafael Pérez Ruiz, Minister for Security of the Spanish Ministry of Interior, said: “The campaign allows us to reinforce and strengthen police collaboration between Spain and the United Kingdom with the aim of creating a hostile environment which impedes criminal organisations from setting up in Spain and criminals from settling in our cities.

“Now more than ever it is necessary for everyone to join forces to give a coordinated and effective response to new security challenges.”

Anyone with information about one of the Most Wanted is urged to call the freephone Spanish number 900 926 111, which will be answered by CrimeStoppers in the UK (using translation if required). Callers in the UK should call CrimeStoppers anonymously on 0800 555 111.

Alternatively, members of the public can fill out an anonymous online form at the UK charity’s website crimestoppers-uk.org/fugitives.

We encourage anyone living or visiting Spain to visit the NCA and CrimeStoppers websites and look at the Most Wanted subjects.

The British Embassy and its network of consulates in Spain work with local and expat partner organisations to assist British nationals.
Consular enquiries – 902 109 356 (in Spain) / +34 913 342 194 (outside Spain)
British nationals who need emergency assistance outside normal office hours should call +34 902 109 356 where they will be given details on how to proceed and how to contact a duty officer if needed.