Las Cuatro Torres in Huercal Overa, Almeria, is one of those buildings that makes people stop in their tracks. Alan and I visited Huercal Overa recently and went for a wander around the streets. 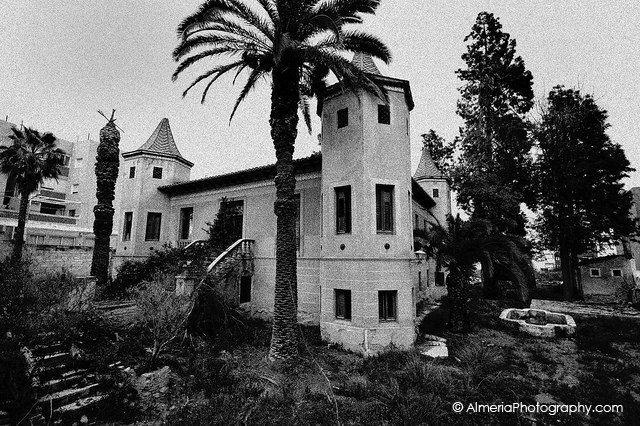 We passed the Teatro Villa on our right and as we drew level with the town hall my eyes were drawn across the road to the most breathtaking building. I stopped in the middle of the pavement and exclaimed: “Wow!!!” Actually I swore a bit too.

The mansion is simply breathtaking and it breaks your heart to see something so beautiful fall into ruin. We decided on the spot to buy it when we win the Euromillions this week *cough*.

Once home, I did a little digging, and it seems that the building was built in the late nineteenth century and was privately owned. However, according to Huercal Overa council records, they purchased it and work began to repair it. the information I found was from 2001 and everything has certainly ground to a halt. Plans were to use it for the town’s Department of Culture.

I have seen some images that give the walls a really pale pink tinge, with green and gold tiles on the tower roofs, but whatever restoration work actually was carried out has removed that.

The most recent records that I found show that it is registered as part of a business (categorised as property development) owned by Diego Ortega, a retired Partido Popular politician in Huercal Overa, although I was surprised that it wasn’t showing as being owned by the town council – okay perhaps not THAT surprised – #lifeinspain. Ortega has previously been in trouble with the courts over building irregularities.

The business is showing as solvent, with Ortega as the sole administrator and the only board member. He became the sole administrator and board member at the tail end of 2014. Previously he was joint admin with Antonio Sanchez Jose Ortega. That began in February 2005. Other former board members were Uribe Martinez Francisco Javier (ceased in 2008) and the lawyer Aznar Garcia Francisco Hermenegildo (ceased in October 2009). It has a capital of €213,000.

I found someone who lived there for many years with his parents and younger brother. Their father, Jose Rivas Jordan, had bought it from Don Vicente Ballesta, the original owner, who was permitted to remain living in the house after the purchase until his life ended. Rumours abound locally of strange noises in the building, ghostly movements and other creepy tales. One of the tales claims that the son of an owner hanged himself in the building and is trapped there forever, roaming the building in eternal torment. Jose’s son on the forum denies any ghostly goings on and said he enjoyed 40 or 50 years of living in the stunning building from the age of four. Jose sold the house to a third owner before it eventually ended up being bought/managed by the council.

I did find another budding paranormal “expert”, Jesús,  who heard about the house from a friend who lived in the town. he suggested to his friend that they take some kit and stop there overnight which they subsequently did. Jesús and his pal entered the house at around 12.15am. They set up a computer, a recording device, two infrared video cameras, heat sensors, magnetic field readers and waited. Jesús claims that at approximately 4am he picked up video images and sound recordings of what sounded like a little girl aged around eight or nine years of age.

Here is a short video that somebody filmed showing the inside.