The debate as to whether it is or isn’t illegal to wear flip-flops while driving in Spain has been going for as long as flip-flops and cars have been in existence. 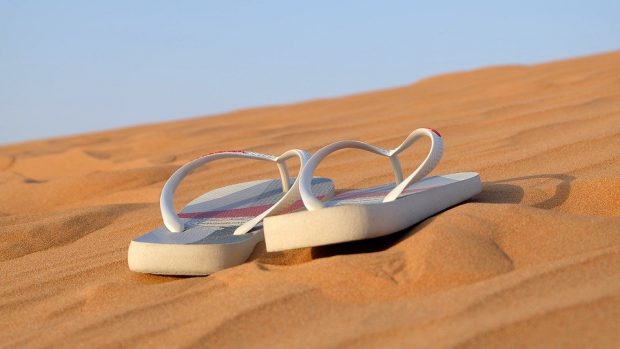 The general consensus has always been that it’s a no-no. And everyone knows someone’s brother’s neighbour’s, uncle’s wife’s butcher’s dog’s mate who has been fined in the past for “unsafe footwear”. However, the DGT has now released a formal statement that gives a different slant on it. The statement comes in response to the many Social Media posts with a list of (sometimes fake) infractions that the world and his brother were sharing, with such items as being fined for having your elbow out of the window.

We were going to translate the statement ourselves, but the N332 and Andrea Lowe have done it for us. Happy reading… and over to them.

This information supercedes anything published by anyone anywhere in Spain previously (just to stop those of you about to post older information in the comments below).

Introduction by the N332

“Driving with Flip – Flops or T- Shirt while driving, illegal or not ???.

Yesterday the DGT (Traffic Deparment) posted a document showing that as a general rule, is NOT illegal to drive with flip flops and without T-shirt.

We wanted to ask your opinion about this common question during summer time. Now, here you have the answer from the mouth of the horse. And we show you the document and ask you to keep it.

Thanks to Andrea Lowe who translated this document for all of you. Many thanks, as well for all the requests we have received to translate it from our followers.” (sic)

Statement from the DGT

As usual, coinciding with the arrival of summer, doubts are being aired about whether it is infringing traffic regulations to drive in flip flops, barefoot, eating, drinking, putting on make-up, hanging your arm out of the window, being shirtless, or having music at high volume, to give just a few examples.

It is clear, however, that each year, new allegedly prohibited behaviours at the wheel are added to the list with this speculation having become a viral phenomenon already this summer.

In order to attempt to clarify what is a genuine cause for concern with reference to road traffic regulations, the facts laid out in several articles of the General Driving Law must be considered and taken into account:

Article 18.1. This is perhaps the most important point needed to clarify all of these issues. It states that “The driver of a vehicle is responsible for maintaining their personal freedom of movement, the required field of vision and to pay proper attention whilst driving, in order to ensure their own safety, the safety of other vehicle occupants and of other road users. For this reason, particular care must be taken to maintain a proper driving position and ensure that other passengers, and any objects or animals being transported are properly located so that there is no interference between the driver and any of them”.

Article 17.1. Related to the previous article, it is stated that “Drivers shall at all times be in a position of full control of and have responsibility for their vehicles “.

Article 3.1. This refers more directly to the act of driving, indicating that driving “should be conducted with diligence, and precautionary measures should be taken to avoid any damage within or outside of the vehicle, taking care not to put in danger either the driver or other occupants of the vehicle or any other road users. It is strictly forbidden to drive in a negligent or reckless manner.”

In view of the above-mentioned articles of law, the following is concluded:

Along with all the behaviours listed in the news articles that have been transmitted by means of the media or by social networks, other behaviours appear that do constitute infringement of traffic rules and regulations as expressly defined by law:

Ed: So… is it illegal to wear flip-flops while driving in Spain? It would seem not… although of course only an idiot would take unnecessary risks.

If you choose to wear flip flops or drive around topless (no ladies – not you)… and you are fined by the police at a spot check – you can always print off the DGT’s official statement and give it to your lawyer ready to contest your fine.  However, if you’ve caused an accident because your wet footwear slipped and caused an accident… be prepared to pay the price.