We are including this review for Hotel Nuevo Torreluz in Almeria as part of a series this week. We stayed there recently, as we had the opportunity of a dogsitter – so we emerged from the hills and headed to Almería city for a couple of days.

Nuevo Torreluz is in a terrific location in the city, being smack bang in the centre of many shops and restaurants, as well as being easy walking distance to the ferry port and a number of museums, the Cathedral, Town Hall square (where there are regular events) and other places of interest. It is also just a 20 or so minute walk from La Alcazaba.It is situated in a pretty plaza, next to the hotel’s own Taberna, with sheltered seating outside. They had live entertainment there twice during our visit, and theyprovide a good range of tapas with your drinks too. They also had paito heaters outside for the evenings (which are still a little chilly in February/March).

Nuevo Torreluz is rated as 4 star on the Spanish scale, and has received a number of good reviews already online. All of that, plus the excellent service we received from our travel agent made it the ideal choice for us to book.

As we pulled up outside the hotel (which is pretty well signposted from around the city), we chuckled to see a statue of John Lennon outside, strumming his guitar. It wasn’t easy to get a photo of this, as he was a popular subject for others to be sat with for their own holiday memories.

Reception itself is beautifully decorated, and the staff are attentive, friendly and helpful. There was a little confusion when we spoke to them in Spanish, but handed over German paperwork, and then explained that we were English… but the confusion did not last for long. In less than ten minutes we were booked in, had organised the car parking (a member of staff provided Alan with a simple map to the nearby underground parking), and we were settled into our room – hanging out of the window to see what was going on around us.

The room itself was basic but spotlessly clean. There were two queen-sized beds, a large flatscreen TV, massive wardrobe, fully equipped bathroom, fridge and writing desk.

We had ordered Bed & Breakfast as part of our stay, so on our first morning… we headed to the next building for breakfast. You just need to take the little card with your room number on it, and they direct you through to a self service buffet.

The breakfast buffet included the following in March 2014:

The downsides to this hotel were very few. Firstly, the breakfast buffet area was quite small, so you were on top of people if you went in whilst it was busy. We were also unable to hire/borrow and iron… which surprised us. However they do provide a laundry / ironing service within the hotel at reasonable prices. I think it was €1,50 per item… but you would need to double check that. This being said – those two small things would not prevent us from recommending the hotel to others. 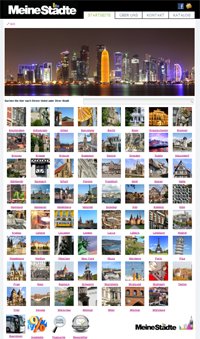 How we booked Hotel Nuevo Torreluz

We used www.meine-staedte.com to book our few days away. Meine Staedte is based in Lippstadt in Germany.

We knew about Meine Staedte because we (with our Gandy-Draper hats on) built their website – and it launched in February 2014. Although the website is in German, don’t let that put you off if you don’t speak the language. Just email or phone and they will look after you.

We were extremely well looked after by Phil (who is English) and Christiane (who is German, but fluent in English and Spanish) – who promised us the best prices for what we were seeking. I have to say that they came up trumps and beat all quotes we could find for the same hotel on other websites. We will be using them again for our next break.

There will be an English version of the website live in the next few months.

We received no financial (or other) incentive from the Hotel for this review – nor were they aware of our business in any way prior to, or during, our visit.