You’ve just found the easiest Gambas Pil Pil recipe ever! These tasty prawns are extremely popular in Spain, and rarely will you find a menu that doesn’t have them. Gambas Pil Pil is a really simple dish to make… but do be careful of the hot oil. 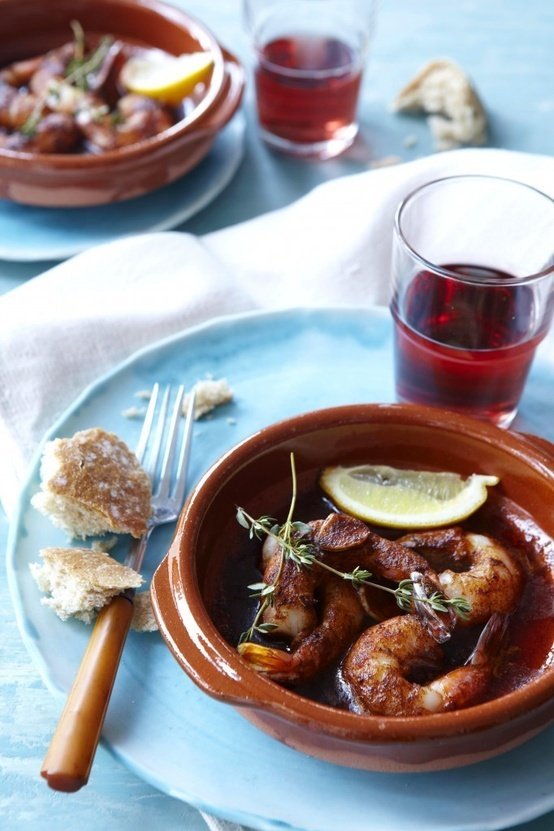 You will need either a heavy base frying pan, or one of those terracotta dishes you find in restaurants all over Spain (see image to the right for an example)

Here is where Gambas Pil Pil gets really easy! Pour about 1/4 inch of olive oil into your pan or dish, and heat over a medium / high heat.

Sprinkle in the paprika and stir well.

Throw in the garlic, chillies and prawns.

They will cook very quickly. So turn your prawns as soon as they start to turn pink. It will only take a minute or so. We have also successfully cooked this with cooked prawns – so if that’s easier for you… dig in!

Carry the pan / dish very carefully to the table and serve with plenty of fresh bread for mopping up that awesome chilli/garlic oil.

You may wish to have a heat resistant coaster or similar to place your pan on so it doesn’t burn your table.

This recipe especially reminds me of sitting on a sunbaked terrace in Lanzarote, watching the world go by. It’s an extremely tasty dish – but I make the same mistake every time… and try to eat it too quickly, which burns my tongue. You’d think I’d have learned by now!

Recipes from the Canary Islands