Free Yoga classes are now available in Tossa de Mar, thanks to a new initiative by the council. The project offers the activities to different age groups in various areas. 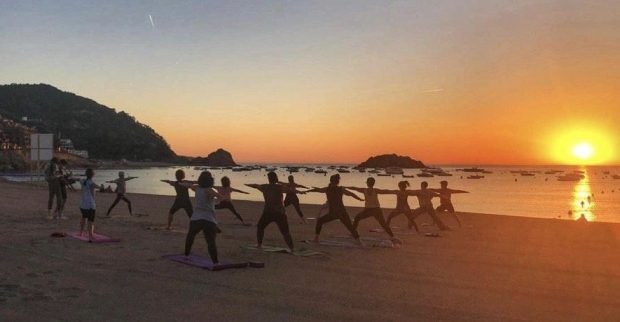 The aim of Tossa de Mar’s council is to promote physical activity while enjoying the outdoors.

Tossa de Mar is currently branding itself as a healthy tourist destination, in conjunction with DipSalut. Yoga is just one of the initiatives planned for the area.

The yoga classes will be available in various locations around Tossa, during September and October 2020.

Mayor Imma Colom (a doctor by profession) spoke about the project, saying, “The health situation connected to Covid-19 has highlighted the importance of activity to strengthen our immune systems. Yoga is something that achieves this. We want to promote health among the population of Tossa ”.

Free yoga classes for everyone

Yoga has been chosen because it is one of the best options for physical activity and a return to well-being can be felt almost immediately. Yoga works the physical, mental and emotional parts of the body holistically. It is not competitive, it can be practiced outdoors and in the current health situation it is a safe practice. The practice of yoga also contains different actions such as meditation, breath control, relaxation plus the practice of postures or asanas.

The free scheduled activities are aimed at different groups and will take place in various places taking advantage of the natural beauty of the town, and always respecting the safety recommendations decreed by the General Secretariat of Sport and Physical Activity. Thus, the activities will be:

• Yoga for teenagers: with the idea of ​​not only providing the physical benefits of the practice, but also as a pedagogical action to raise awareness among young people about the values ​​that yoga brings. Yoga is a fun and healthy discipline, and offers a space for socializing at a time when most common spaces are being closed or restricted. There will be six classes until October 23 on the track of the Casal de Joves at 18:00.

• Yoga for families: the practice of family yoga, in addition to the physical benefit it brings, helps to open new channels of communication between parents and their children, improving the care and management of emotions. There will be six classes until October 23 in the La Nau building at 5:00 pm, but there will also be two days (October 16 and 23) in the school yard at 7:00 pm.

• Yoga for people over 65: Yoga is a highly recommended physical activity for seniors for its benefits, both physically and with increased flexibility, improved balance and breathing; as psychological with improved mood, concentration and relaxation; and of course socially. There will be six classes until October 24 in Plaça Sant Miquel at 5:00 p.m.

In addition to yoga on the Platja Gran, which has already taken place on Sundays in August, there will be:

Please note that the maximum number of places will be based on the health restrictions that exist at the time of the activity and that you must pre-register at the Tourist Office (972340108).