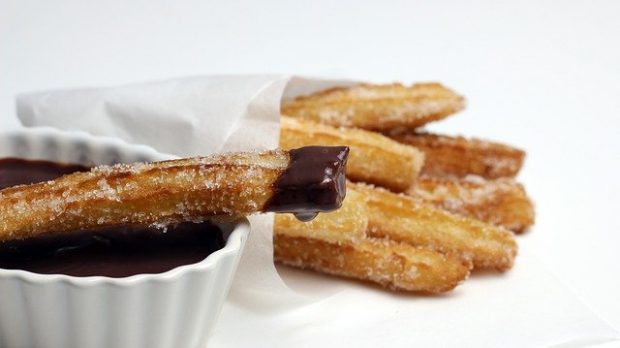 These churros are lovely sprinkled with cinnamon and served with a traditional thick dark chocolate sauce. Personally I’m not a fan of dark chocolate… so prefer it with milk chocolate… or even Nutella. But you can play with the chocolate. Try it with added flavourings such as orange or lemon flavoured essence… or perhaps a drop of brandy. Or even mint essence for that After Eight’s flavour.

Churros are a real Spanish tradition… just as paella and tortilla are. Walk along Spanish streets and the smell will send your nostrils and tastebuds into overdrive. But what if you can’t get to a Spanish town? Or if that chilly morning is keeping you indoors? This recipe will show you how easy it is to produce them at home. As long as you vare very careful with the hot oil… you should be fine.

Normally these would be eaten in the morning – but if any of you are getting to know me yet… you will know that I eat any food at any time of day. So… churros could be a nice dessert after dinner…. or a decadent snack. Just don’t blame me if you start eating too many… and those clothes are getting a bit snug – now you know how I feel!

Right… onto the recipe.

Begin by making the dough. Mix the flour and salt in a bowl, then melt the butter in a saucepan, add the water and bring to the boil. Remove from the heat and add to the flour, stirring rapidly with a wooden spoon until well mixed together. The mix should be smooth and putty-like but just too sticky to handle. If it is dry add a splash of hot water. Spoon into an piping bag fitted with a star-shaped nozzle and rest in the fridge for about 30 minutes. In another bowl mix the sugar and ground cinnamon.

Pour the double cream into a saucepan and add the cinnamon stick, cardamom pods and vanilla essence. Warm gently for 5 minutes or so to infuse the flavours but do not boil. Roughly chop the chocolate into tiny pieces and add to the cream, increase the heat slightly and stir continuously until the chocolate has melted. Remove the cinnamon and cardamom pods.

Warm the sunflower oil to 180 °C for deep frying.

*Tip. It is crucial to have the correct temperature for the dough to cook well. If you do not have a thermometer then try cooking a small ball of the dough first to test. It should take about 4 minutes to become golden brown and cooked through. Adjust the temperature accordingly to achieve this.

Once the oil is the correct temperature, pipe the dough directly into the oil, cutting each churro with scissors to the desired length. Cook for about 4 minutes until golden and cooked all the way through. Then transfer to some kitchen towel to drain and then toss in the sugar and cinnamon mix.

Pour the hot sauce into a cup or glass and serve with the churros. Indulge!

Recipe and image courtesy of Delicious Spanish Recipes – thank you! Sadly they are no longer in business – but we are still grateful to them for their donated recipe.

Want more sweet treats? Then click the link for more!