The Cueva de Los Letreras is just outside the town of Vélez-Blanco in northern Almería. The paintings on the cave wall are estimated to be around 7000 years old, added during the Neolithic era and the later Copper Age. 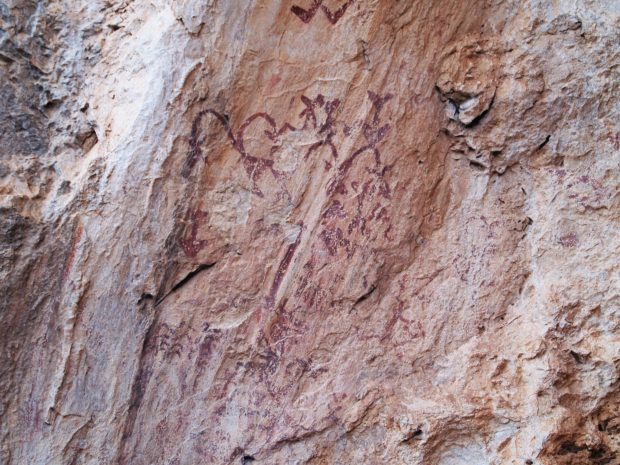 Dietmar Roth, the Deputy Mayor of Vélez-Blanco is very knowledgeable about this town and, as a Professor, he also knows a fair amount about the ancient history of it too. He very kindly gave me and my Father in Law (Stan) a private tour and presentation.

Cueva de los Letreros is one of the most important cave painting sites of the Iberian peninsula. This 25x6x10 metre cave, located high up on the slopes of Malmon, faces east overlooking the valley including Vélez-Blanco and much of Vélez-Rubio. The cave is shallow, the same as 90% of the important caves in Eastern Spain. It has served as the basis for many scientific articles about the evolution of man.

Its paintings were first officially analysed and published in 1868 by Gongora y Martinez (born in Tabernas, Almería), in his book “Antiguedades Prehistóricas de Andalucia”. However, older Arabic documents have also been found which refer to the art in an area calle “Argan”. Argan means “cave” in Arabic and the area still shares that name, including a cortijo at the foot of the slopes. Gongora’s work was later expanded upon with drawings  and reproductions by Breil, Cabré and Benítez Mellado. Although the reproductions vary, it is Benito’s work that is considered the most accurate – drawn in 1:1 scale.

The iron oxide (ochre) paintings on the limestone were done by peasants and cattle breeders according to research and analysis. They were homo sapiens with dark skin and blue eyes. People from back then were lactose intolerant and gluten intolerant. They were in the midst of a genetic change, which enabled them to go on to eat wheat, rye and cheese.

Most of the people then were living in the valley of Vélez-Blanco arther than in the hills. Tombs have been found, as well as a village around two hectares in size. Most of the villages were occupied by around 50 to 100 people. In this area there are approximately 35 “half caves”, 25 of which are listed with UNESCO.

The cave that we visited was declared a National Monument in 1924 by the Spanish. Sadly when tourism really took off in the area during the 1960s and 1970s, visitors did not respect the cave and it has been damaged by people throwing water and Coca Cola at the paintings to make the paint appear darker… and by rubbing the images. Pollution has also taken its toll. The imagery is very faded today, but you can see diagrams which are clearer. Today the area is fenced off (since 1996) and all visits must be by appointment.

The largest “figure” on the cave wall is the “Brujo”, a shaman, wizard or witch doctor. He holds a sickle in each hand and stands approximately 50cm high, with long curved horns on his head. In his left hand there is a shape that is yet unknown. Some say it could be a piece of fruit; others suggest that it is a heart. Other images on the cave wall include deer, goats and running water – both of which were vital The water is especially important because there is a powerful spring nearby. There are also markings that are thought to be a form of writing, perhaps representations of the landscapes, social relationships or family trees. Shamas have visited from Australia, Latin America and the United States – who have suggested they may mark spiritual journeys. There are also flowers that come from the same family as poppies. There are also paintings on the cave floor, human forms and triangles as well as another witch doctor and schematics.

In the 1600s the forests were cleared but 8000 years ago the area was almost entirely made up of forest.

The paintings are thought to have been added to mark territory, or as a ceremonial place of worship. Eve today, rock art continues… such as that in Namibia or by the Aborigines in Australia. We must be careful not to directly compare these people – they are 8000 years apart of course –  but some of the activities are similar.

One figure is often thought of as being who is now called the “Indalo man”, one of Almeria’s most famous images. He holds either his arms above his head, or perhaps a bow.

The name “Indalo” was donned by a group of artists and a writer in the 1960s. It comes from the word “Indalecio”.  A hybrid image was made – which closely resembles the Indalo man as we know him today. Mojácar and the group of artists had a close relationship, and this is why Mojácar has adopted the Indalo Man as their own. There are also images picturing an “Indalo Man” in Jaén.

To view the paintings and to learn about their history can be done by appointment with the Town Hall in Vélez-Blanco. To reach the cave, you must take the turn to the left of the petrol station just outside the town. Follow the signs uphill and there is a parking area available. From the car park, you will need to climb a good number of stone steps to reach the gate. Due to its location, it is of course inaccessible to people with mobility isues. Once inside the gate, watch your footing because the surface is very uneven and can be slippery. Sturdy footwear is advised. Stan and I wore our hiking boots which were perfect.

For your own safety, you will only be permitted access if you are wearing sturdy, non-slip shoes. All visits will be cancelled if it is raining, snowing or icy.

Can’t get up to the cave?

For those that can’t physically visit the cave, we recommend a visit to the Museo Comarcal Velezano Miguel Guirao in Vélez-Rubio. This museum has a floor dedicated to the paintings and you can see the imagery without risking life and limb on slippery rocks.