Hash House Harriers have raised €4560.21 at the recent Red Dress Hash 2015 for the Cudeca hospice. 86 hashers from Málaga, Mijas and visiting Hash House Harriers clubs went along to support the event, with most wearing red dresses for the run. 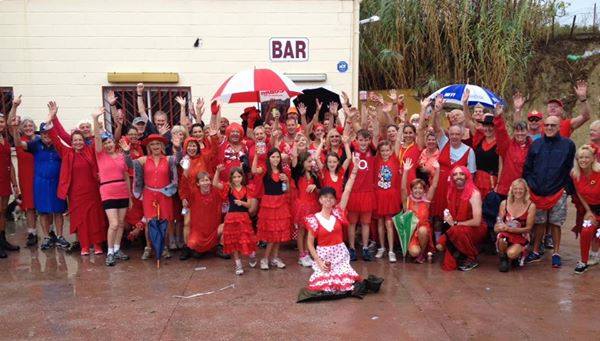 Hashers from the other side of Estepona and even Almería congregated in Mijas, ready to enjoy a good run (or walk), some singing and fun, a good laugh, and all for a great cause.

The target was €3000, so the organisers were thrilled with the result which smashed that figure to smithereens.

Speaking to Spain Buddy, Carlos White who was key in organising the big day, said: “As a Hasher, I knew that we could do something brilliant and that has definitely happened.”

Carlos lost his sister, Toni, to cancer when she was aged just 30. She spent her final days at the Cudeca Hospice and Carlos was so overwhelmed by the love and care she received, he was chomping at the bit to get involved in supporting the charity. In November 2014 he was able to do so and is now key in fundraising and organising events for the charity. Instead of waiting for people to come to them, he is proactive in approaching people and organisations to see what they can do together to help raise much needed money.

Carlos is humble about his work with Cudeca, but his passion and drive are contagious – an approach that has proven to be successful.

Cudeca would like to thank everyone who helps to raise much needed funds, and especially to the 86 hashers who popped their red dresses on (even the fellas – any excuse eh) to raise more than 50 per cent above the target figure.

Fundación Cudeca offers palliative support to people in the Malaga are with cancer and other advanced or terminal diseases. Their aim is to make the last part of these people’s lives as comfortable as possible by means of support, care, love and above all… with dignity and respect. Additionally they offer support to the patient’s loved ones through the process, be that physical or emotional.

The funds donated are fully accounted for, according to Cudeca’s policy of absolute transparency. You can find out more information about this and the vast range of services Cudeca provides, by visiting the website at www.cudeca.org

Carlos went on to tell us about the “Cudeca Goldies”, a group of people who regularly meet and raise funds for Cudeca. Previous events include tennis tournaments, raffles, auctions and music events. These events are always well attended and do a huge amount to support the work at Cudeca. You can find out more about the Cudeca Goldies by visiting Cudeca Goldies although Carlos advised that their new website is coming soon.

Many people support Cudeca, and it would be impossible to list them all. So here are just a couple: Tom Allan, who raises money at bootsales each month, John Gow who raised money during his 12 month running challenge, the many entertainers who come together for events through out the year and of course the huge number of people who dip their money into their pockets.

To get involved or to host a future event, contact Cudeca through their website – they’ll be thrilled to hear from you.

About the Hash House Harriers

The Hash House Harriers are a global non-competitive running club (although a number of us walk instead) who meet regularly to enjoy their surroundings before gathering for jokes and laughter and a bite to eat.

I am a member of the Indalo Hash House Harriers, and meet twice a month for a walk, beer, food and (always!) a good laugh.

For more information about the Hash House Harriers visit Wikipedia

About the red dress hash

Back in 1987, Donna Rhinehart visited her friend in Southern California. However, timing dictated that she was taken straight from the plane to meet her friend as the Hash House Harriers in the area began their run.

Due to her attire – the now infamous red dress – she was advised to wait in the truck until her friend returned. Donna was having none of that, however, and joined the hashers… red dress an’ all.

A year later, the San Diego Hash House Harriers sent Donna a complimentary airline ticket so she could return. As she joined the group, she was amazed to see that everyone was wearing red dresses for the occasion and the event was subsequently covered in the media.

Many other Hash House Harrier groups around the world joined in, and now, as per Donna’s request, the event is held annually, often to raise money for local charities.

Some photographs from the day. If you have any photographs you would like to see added to the gallery, please send them to info@spainbuddy.com and include “Red Dress Hash” in the subject line.