One of my pet hates (of which there are many) is the inability to fly the Union Flag correctly.

On a recent trip to the Alicante region I couldn’t believe just how many upside down flags I saw as I was driving around largely British expat areas. Whilst I can forgive (to a degree) Spanish businesses, lets face it the difference is subtle, I get really angry at the sheer number of British owned business who get it wrong. 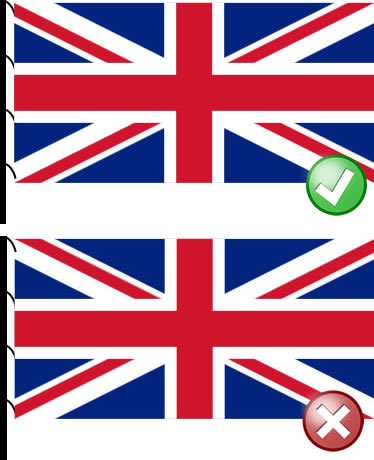 So, here it is for anyone who doesn’t already know.It’s not difficult. Anyone British born should know this.

Unlike some other countries (for instance the US) who have codes governing the use and handling of their flags, the UK doesn’t have any such codes. So, you can do anything you want to the flag without risking prosecution.

There is no concept in legal terms of the desecration of a Union Flag, you can burn the flag, you can wipe your backside with it, and you can legally fly it upside down without consequence. Whilst none of these scenarios are legally wrong they are in my opinion disrespectful (some far more than the others, obviously).

As for those British business getting it wrong whilst trying to tap into the expat market by displaying flags to advertise their own Britishness, they are, putting it frankly, just embarrassing themselves. I certainly wouldn’t give my business to anyone too stupid to know or too lazy to research the correct way to display our (or any other) national flag.