Canary Islands news selection from the last seven days and items including free bikes, a wine competition, cake competition, sweet goodies and a petite blonde who is seeking a new place to live. Published on Wednesdays.

People in Las Palmas de Gran Canaria will now be able to use city bikes to get around the city with the launch of a new free “loan” bike scheme yesterday (March 23).

The scheme has already been launched successfully in other areas of Spain including Malága where we saw it in action in November 2014.

In Las Palmas, you will need to pre-register by visiting www.bybikelpa.com and filling out your details. The website is in Spanish, but if your language skills aren’t up to scratch, ask a friend or have Google Translate open in another tab or window.

You can also register in person at the following locations:

Once registered, you will receive a mobility card. Just run it over the scanner to release the bike. Even simpler is by downloading the Bybike application and following the instructions. This option also requires prior registration.

The service becomes completely free now there is no need to send a text message, a change from the previous system, Biciambiental.

The maximum usage time is three hours. Once this time is up, you simply need to wait five minutes to take another bike.

The bike is a sturdy make with three gears and also has a basket for your shopping goodies, and a bell to warn people to jump into the side bushes out of your way. The bikes are for adults and are available every day of the year. Happy cycling!

The Policia Local in Las Palmas de Gran Canaria has advised that the city has suffered from several episodes of heavy rains that caused a rockfall that affected roads and casued some flooding.

They would like to remind everyone that in case of heavy rain drivers should slow down, turn on lights and take precautions in the circumstances of the road.

Of course this does not mean that you stop doing all of those things once the rain ceases.

Be considerate to neighbours

The Policia Local would like to remind people to be considerate when carrying out work in their home, although the same goes for other noise such as loud music.

Permitted hours for noisy work run from 8am to 10pm from Monday to Saturday. Some consideration for the more “social” type of noise inside buildings should be noted between 10pm and 8am to avoid disrupting your neighbours’ sleep.

To report excessive noise or other incidents, do not hesitate to call them on 092.

Casa Alta de Tindaya in La Oliva, Fuerteventura, opened its doors again on Sunday for the first time since the council acquired it in 2010.

At the opening ceremony headed up by president of the Cabildo, Mario Cabrera, and the Mayor of La Oliva, Claudia Morales, attendees were given a tour of the 18th century building. They learned of its history although its original tale is yet unknown. However, according to its building style, and the materials used, the building was erected under the Bourgeoisie of the time. Legends about its first owner, cursed by the evil witch Esmeralda, have survived to this day.

The aim of the project, and rehabilitation of the building, is to provide a new architectural space for public use and enjoyment. It has been sympathetically restored and is undoubtedly one of the prettiest buildings for miles.

Haría council is continuing improvements around the coastal town of Arrieta, Lanzarote.

The work includes the modelling and resurfacing of pavements in the town. This section of work began in January but will now continue with a focus on improving accessibility and transit of persons with disabilities or reduced mobility.

This second phase of the project, wholly funded by the Northern Consistory, with a total cost of €186,740, will allow for work on several streets. Affected areas are:

The project also includes the extension of the pavement on the right hand side of the street La Garita, with the aim of creating an amenities area that will allow for commercial development of the site.

Both venues will be offering a wide selection of Lanzarote wines for you to try.

The available wines from bodegas across Lanzarote will be available for just €1 per glass and you can then vote for your favourites.

Lanzarote wines come in a real range of varieties including red, white and rosé.

Go on, spoil yourselves and enjoy some of the best flavours Lanzarote has to offer. 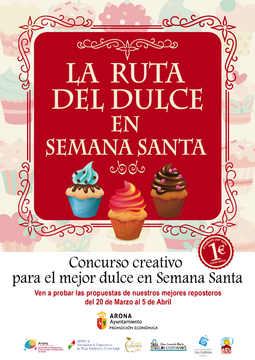 Got a sweet tooth?

Arona in Tenerife is currently running its Ruta de Dulce en Semana Santa – a treat for anyone that prefers a sweeter edge to their diet.

The ruta is organised by Arona council, in conjuction with participating venues, with the aim of stimulating trade with the celebration of Easter.

The event runs until April 5 2015. All voting slips will

Happy eaters can vote for their favourites too! After you have tasted your €1 sweet pastry or dessert, you will be asked to rate the sweet tapa from one to five on a slip that you then place in a container at the venue.

Voting slips will be collected from the venues on April 7 ready to be counted and the overall winning venue announced.

So… what are you waiting for? Do you really need an excuse to tuck into something sweet?

Want to make a cake with your favorite flavour and personalized with your name?

You must be living in Tenerife – that’s the only catch. Oh, and we suppose you must be able to count to more than ten.

Entering the contest is easy:

The person with the correct number or closest wins a cake.

The competition ends on April 1 2015. The winner will be notified on the Facebook page’s wall

The competition is only open to residents of Tenerife. The lucky winner must collect their cake from Fun Park, Calle Bencheque 1, Ofra, Santa Cruz de Tenerife.

Alternatively, the cake can be collected directly from the bakery, “La Sirena” on La Cuesta, San Cristóbal de La Laguna.

Good luck and please do let Spain Buddy know how you got on.

She is a small dog, weighing fewer than 10 kilos and the kennel would guess that she is approximately two or three years old. She’s very sweet. The Klub doesn’t have any room to be able to take her but they would like to find her a home.

What’s happening in the Canary Islands? Click HERE to browse, or to add your own event