Canary Islands news selection from the last seven days and items including new parks, messages in bottles, weather, Bobby the Wonderdog and a tragic accident. Published on Wednesdays. 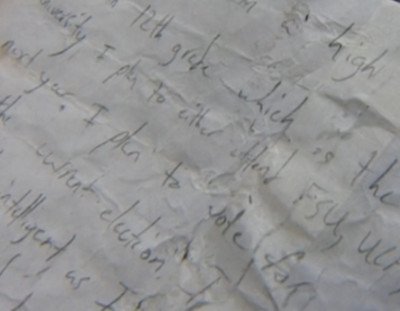 Message in a bottle

A glass bottle has travelled thousands of miles over three years with a message inside to reach the Canary Islands.

The bottle was launched in 2012, as an experiment, by students of the Institute of Florida, in the United States.

The institute launches bottle every year as a project to see how far they travel.

The bottle had to be broken to reveal the contents which was a letter with some current information (including a statement from a student who said they planned to vote for Mitt Romney) and a US dollar bill.

The Canaries said goodbye to a colder March than normal including five days of snow, which is double that predicted by AEMET (Spanish meteorological agency).

Like the previous months, March was fairly dry with an average rainfall of 26.2mm across the islands.

From noon, a number of bands all common to Lanzarote will provide 11 hours of music from noon until 11pm. performances will be concentrated in the plazas of la Constitucion, San Francisco and La Mareta. The music will be in a variety of styles including reggae, ska, metal, rock, pop and funk.

“We praise and support such initiatives that contribute to enhancing the  historic La Villa de Teguise, and energize commerce and  restoration,” said the mayor of Teguise, Oswaldo Betancort.

There will also be a photography exhibition in the Teguise streets from second year students from the School of Photography.

The new tourist office in Playa Blanca helped 4,500 people with enquiries during March.

The figures included 1,864 tourists from the UK, and 919 Spaniards who came to the Calle Varadero office, asking for information on sites of interest in the municipality and the island in general. At Easter alone, the office helped a thousand tourists.

The Mayor of Yaiza, Gladys Acuña, said: “The usefulness of the service and popular reception confirms that Playa Blanca deserved a tourist information point.”

The new office of 76 square meters, is open every day during morning and evening hours continuously. The municipal government chose this site to replace the Calle Limones kiosk. Before the opening of the new office, local authorities undertook the extension and ramp of the pavement in front of the facade allowing ease of movement pedestrians and disabled people.

Mayor of Yaiza, Gladys Acuña, who once described the expansion of the Port of Playa Blanca as “our highway to the world,” has commended the municipality for pushing forward the project by announcing tender for works for a €48 million budget. “This investment is a vital infrastructure for Yaiza that opens up a range of possibilities for the economic future of our town,” said the mayor.

The Ayuntamiento of Tías is investing €300,000 in the renovation of 16 parks in Puerto del Carmen and surrounding areas.

As if sea and sand wasn’t enough, families with children have a new reason to go to the beaches of Puerto del Carmen with new attractions and areas especially targeted at children.

The Department of Environment, Beaches, Parks, Housing, Fisheries and Heritage of Tías, led by Councillor Yolanda García, is implementing a plan for the renovation and modernisation of 16 existing playgrounds.

All playgrounds are mounted on rubber surfaces and covered with artificial turf or special surfaces to prevent injuries.

Yolanda García explained that the new parks are already visible along the beaches of Matagorda, Los Pocillos, Playa Grande and La Tiñosa in El Varadero as well as in the barranco of Las Truchas, Los Lirios and the IES de Tías, in Tías centre.

The villages of Macher, Conil, Macher and Masdache will be seeing improvements with new attractions on synthetic turf instead of previous facilities.

Our most sincere condolences go to the family and friends of Neil Stone after he passed away suddenly this week. Neil had recently taken ownership of the Harp Bar in Puerto del Carmen in Lanzarote.

Bobby the Wonder Dog is no stranger to TARA because he was originally placed in a foster home by them.  The foster home soon became Bobby’s forever home when his new owner could not bear to part with him.

Sadly, Bobby’s new owner had some serious medical problems which meant he could not keep little Bobby – a heartbreaking decision to have made. During his time with his owner, Bobby received a few too many treats which led to him being over-fed. TARA placed Bobby at Pet Pals kennels where Louise and her family got him back on track and to a healthier weight.

Animal lover Sarah O’Neill agreed to be a temporary foster mother for Bobby, and he joined her family temporarily, getting along great with Sarah’s other dogs and even the feral cats that cares for. Bobby got back to optimum health and was a happy, waggy-tailed boy once again.

Bobby then found a home through the “Foster to Adopt” scheme, which allows potential owners to ensure the new pet is right for them. Everything seemed to be going perfectly but sadly his new family left the island so Bobby returned to Sarah’s loving arms. . Everything seemed wonderful, but the new family left the island and returned Bobby to Sarah at the last minute.

Sarah is off on a big adventure that takes her off around the world for a couple of years, so she is unable to keep him.

This leaves poor little Bobby without a home. he really needs a safe, secure, loving home where he can relax and enjoy lots of walks and cuddles. He gets on brilliantly with people, other dogs, and even cats. Is this your home? Could you provide Bobby the Wonder Dog with the stability he deserves?

Lets be able to promise Bobby that his next move will be his last.

This year Enorte is expected to exceed expectations both in terms of economic benefit generated during the fair and also the number of visitors. In addition, the conference ‘Norte Emprende’ takes place before Enorte, on April 9 and 19 at tla Sala Sabor at Gáldar town hall, and where entrepreneurs from the area present topics focused on  innovation and entrepreneurship. There will also be opportunities to find out about upcoming projects as well as to network with industry professionals.

Registration for children aged between four months and three years of age opens on April 10 and runs until May 6.

This is for Buzanada and El Fraile nurseries.

Those interested should request an appointment from Social Services in Arona by telephoning 922 761 600.

You can also call in from 8am until 10 am for Citizen Services Los Cristianos, La Galletas and Arona Casco. You will need form Modelo 926.

A special workshop aimed at families, teaching discipline for children and focussing on positive reinforcement, was held at the San Valley Cultural Centre Lorenzo.

The workshop, organised by the  Ministry of Education, Directorate General of Planning, Innovation and Educational Development, was presented by the psychologist Carlos Díaz Pérez and attracted a large number of attendees.

With a large amount of audience participation, the basic principles addressed the effective application of limits, rules and conditions initiated with rewards and punishments, which led to an interesting debate.

In parallel to the the workshops, children enjoyed games and other activities.

The development of these free workshops, was aimed at the general population, with the aim to “promote opportunities for participation, information, training and reflection on everyday situations of family life, as well as provide strategies and skills to improve family functioning “.

A 55-year-old woman was killed on Tuesday (April 7) in Puerto del Rosario after being hit by a Tiadhe bus on her way to work at the  way to his workplace, Hospital General de Fuerte ventura Virgen de la Peña,  where she worked as a nursing assistant.

The deceased, identified as SFB and locally known as Chana, was married with three children.

Chana left her home, as she did every day at approximately 7am to go to work. The route between home and hospital is only a kilometre, so she walked as normal. When she reached the road between Puerto del Rosario to Antigua, however, a bus hit her front on and the impact caused her instantaneous death.

Police rushed to the scene to organise traffic, normally pretty heavy at that time of the morning. Emergency Department Canario (SUC) arrived within five minutes, but despite thirty minutes of resuscitation activity, the doctor had to certify the death of the woman.

Police are investigating the causes that led to this tragic accident, but have already ruled out any driver involvement in the intake of alcohol and drugs.

This is the first fatality traffic accident during April in the Canary Islands.

The best island in Spain

Fuerteventura has been voted the best island in Spain 2015 by users of TripAdvisor, the world’s largest travel website.  The news was greeted with enthusiasm not only in tourism businesses but also by the government.

Fuerteventura’s Councillor for Tourism, Blas Acosta, was thrilled with the award. He explained: “We should be very happy with the perception of tourists through a portal as prestigious as TripAdvisor.” He added that this recognition of Fuerteventura “goes to show that the island is fashionable and 2.5 million tourists last year must become our goal to exceed for 2015”.

Tripavisor reaches 315 million unique visitors per month, in addition to more than 200 million views and comments.