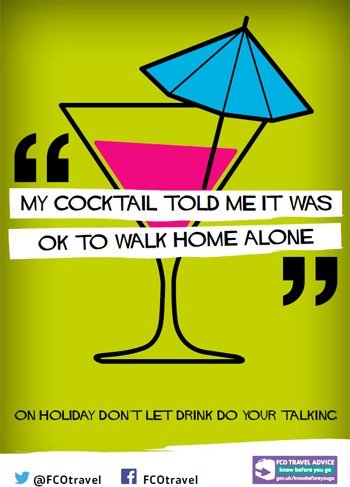 In a new campaign under the banner “On holiday, don’t let drink do your talking”, the Foreign and Commonwealth Office is encouraging young holidaymakers to think before and while they drink to avoid putting themselves at risk of serious harm. Expats are being asked to share this important message with visiting friends and family to help ensure they spend their time enjoying their holidays, not in hospital, jail or worse.

New research shows that around half (51%) of 16-24 year olds say they are likely to drink more on holiday than at home.  Almost two thirds (62%) attributed this to alcohol being cheaper. Peer pressure is also a major factor, with 40% of those surveyed saying they had felt pressure from friends to drink more than they wanted to.* Consular staff in Spain have already been called on this summer to come to the aid of British nationals who find themselves in trouble after drinking to excess.

Will Middleton, Consular Regional Director for Spain said: “Going on holiday is a great opportunity to relax and have fun with family and friends, and enjoying a drink can be part of that.  We’re not telling people to stop drinking but we do want people to be aware of the consequences of drinking to excess – and our research shows almost half of young people understand them already.

“Laws and customs regarding alcohol vary from country to country, for example with lower limits for drink driving in Spain and “free-pour” rather than specific measures, which makes it harder to control how much you are drinking. It’s important to find out about local laws, including on alcohol consumption, to avoid a night in a police cell or even a criminal record.

“Drinking can impair judgement.  The effect of being hospitalised or arrested overseas goes far beyond a ruined holiday and can have a devastating impact on family and friends – financially and emotionally.  So our message is have fun in the sun, but drink responsibly so you don’t put yourself at risk of harm.” One example of what can happen is the story of Jake, who fell from a balcony after a night out with friends. His moving video story can be seen here:

The FCO is also encouraging holidaymakers to show respect and consideration to other holidaymakers and local people while on holiday – the findings revealed that excessive alcohol consumption resulted in young British holidaymakers engaging in risky or disrespectful behaviour:

The best beach resorts in Mallorca

Reasons you should visit Catalonia