Meet Sapper, a brindle Boxer around 18 months old. He needs some help urgently. 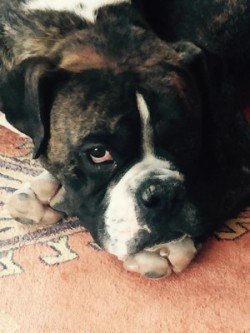 Four weeks ago he appeared at our friend Kari’s place, undernourished and covered in fleas and ticks. In true Boxer fashion, he rolled up and instantly made himself at home, and pretty much there and then won Kari’s heart. As Boxer owners ourselves we can testify to just how well they use those puppy dog eyes to ingratiate themselves!

He’s warm, he’s loving and loyal, he’s a great dog all round. Boxers just are…

Up until now Kari has had every intention of keeping him. He’s been taken to the vets, he’s been chipped, he’s been treated for leish and all the expensive medicines to get it under control have been paid for. He will need to be treated for the rest of his life to keep it at bay and the medications will cost around €15 a month. He’ll need castrating and a rabies jab which the vet has not yet been able to do because of the medications needed so far thin the blood.

So, what’s the problem. Although the plan was for him to stay with the other 10 rescues Kari and her husband have an intense rivalry has developed between Sapper and one of the existing dogs. This morning he had to be rescued from the other dog who was shaking him ‘like a rag doll’. As I write both dogs have had to be kept away from each other which is not good for either of them. Migi the Rottweiler is normally a placid dog, as is Sapper, but unfortunately it’s become very clear that these two are just not going to get on.

Let’s be honest here this is not just some dog re-homing story for us. Kari has spent a fortune on vets bills, has