Recently I was lucky enough to get the chance to visit Barcelona. This Spanish city is famed for its eccentric, quirky architecture, and as someone who has been called quirky and eccentric a few times myself, I couldn’t wait to see the place first-hand rather than just looking at it in books and online. I wasn’t disappointed. 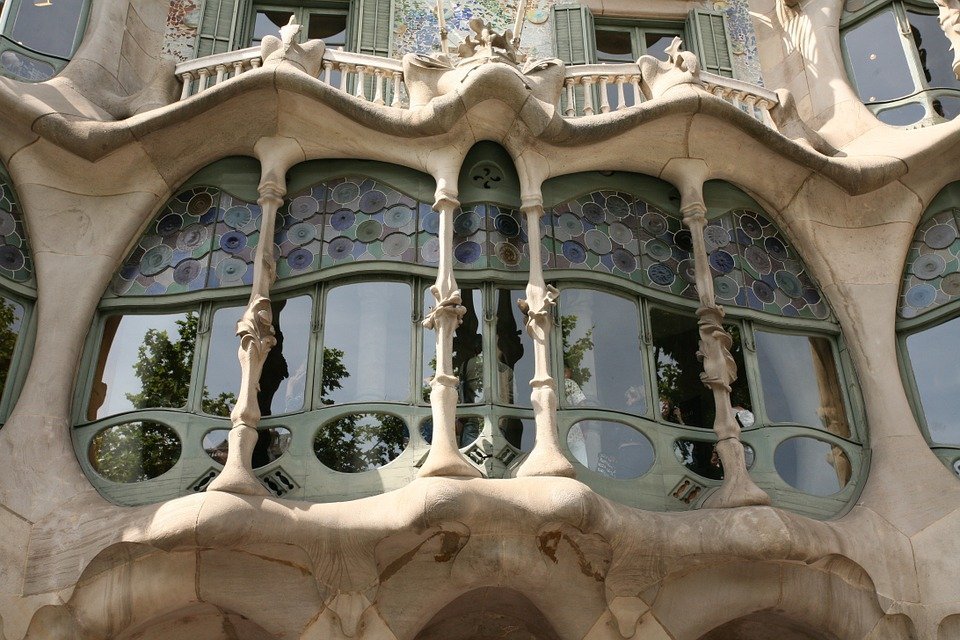 Barcelona is Spain’s second-largest city as well as being the capital of Catalonia. Catalans are very conscious of their regional identity, which is distinct from the rest of Spain, and I heard plenty of Catalan dialect spoken throughout my stay (which is pretty different from the Spanish you learn at school in the US!)

With loads to do and see for all kinds of people, some amazing restaurants and great shopping possibilities, Barcelona is one of Spain’s most trend-setting, cosmopolitan cities, and you could spend a week here just shopping and eating in real style – wallet permitting, of course. But what Barcelona really attracts is architecture and history buffs, mainly because of one name: Gaudi.

Antoni Gaudi (1852-1926) is probably the greatest Catalan architect there is, and his style, although linked to modernist and art nouveau movements of the time, is completely his own. You can see examples of his work all over Barcelona, from churches and stately homes to more ordinary residential houses like the Casa Batlló, which really does look like a house made out of bones. Even at its most gothic and haunting, there’s always something fun to Gaudi architecture, and even people not normally interested in looking at buildings will get a kick out of them.

I knew I probably didn’t have as much time in Barcelona as I wanted to see absolutely everything – the city is littered with World Heritage sites – but almost all the guidebooks I looked at had singled out one building as the most important landmark in the Catalan region, La Sagrada Familia (The Church of the Holy Family). Seeing it up close and completely in awe, it was easy to see why this is a UNESCO World Heritage site. The magnificent cathedral includes seven examples of Gaudi’s work, although he didn’t take over until 1883, when building work had already started, making radical changes to the design in general. It really was a lifetime’s work that Gaudi sadly failed to complete before his death in 1926.

Did you know that Barcelona also has an older, gothic Quarter that has nothing to do with Gaudi? The Catalans call it the Barri Gòtic. It’s closed to car traffic, and is a maze of narrow streets and tall buildings that are very easy to get lost in (trust me!). But then you discover a plaza you’ve never seen before, a wonderful little cafe and your complete lack of bearings doesn’t seem to matter… In the evening, this neighbourhood surprised me by being one of the liveliest quarters in the city.

Another World Heritage site, the Palau de la Musica Catalana (the Catalan Music Palace), would be swamped by visitors in any other city except Barcelona, where fantastic architecture is simply everywhere! Designed in 1908 by the architect Doménech i Montaner as a testament to the ‘Catalan Renaissance’, and built specifically as a venue for performances of Catalan music, it’s incredibly intricate, detailed and colourful, with a facade that blends tile, brick, sculpted stone and stained glass.

After gothic splendour, I went ultra-modern with Jean Nouvel’s Torre Agbar, which was built in 2005. From the distance, it looks remarkably like a gigantic, funny-coloured cucumber sticking up hundreds of feet out of the ground. I saw it first in the daytime and then went back to see it at night, when it was illuminated in tones of lipstick red and midnight blue. Eager to take a look inside, I discovered I could only explore the first floor foyer, but found some pretty interesting installation-type exhibits there.

Another thing about Barcelona is it’s so easy to get to: Barcelona Airport is about eight miles away and is a major international hub. I found a taxi very easily, and it took about 25-minutes to get to the city centre, although there is also a twice-hourly train. A lot of international airlines fly direct to Barcelona, including Air Canada and American Airlines.

Catherine Lees is the travel blogger behind this post. She loves exploring new cities and cultures, and shares her tales through her blog worldgettingsmaller.com. She’d love to hear from fellow travelers, please check out her Google+.

Catherine Lees is the travel blogger behind this post. She loves exploring new cities and cultures, and shares her tales through her blog worldgettingsmaller.com. She’d love to hear from fellow travelers, please check out her Google+.