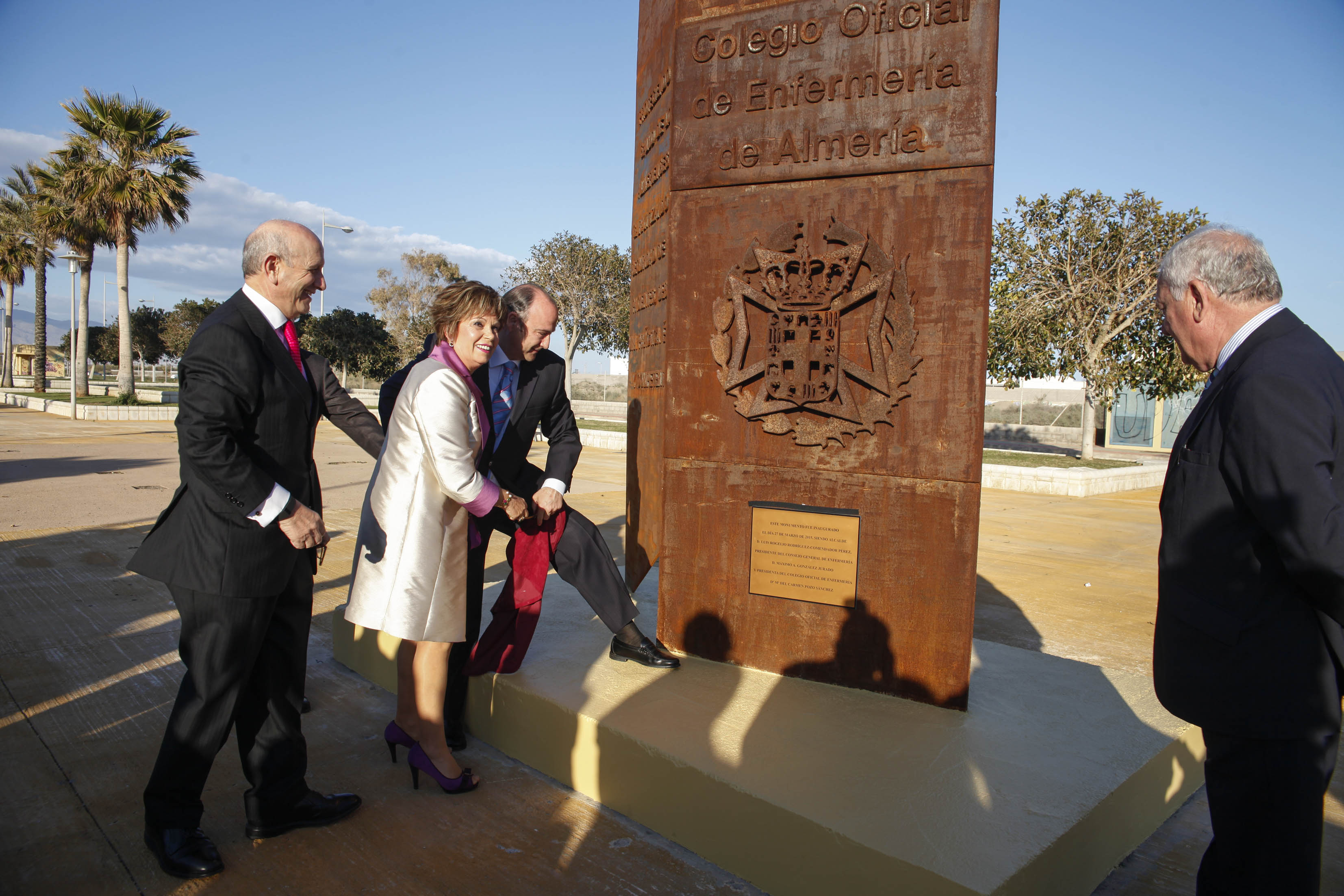 Almeria city now has a new monument, unveiled by the mayor of the city on March 28.

Mayor Luis Rogelio Rodríguez-Comendador was responsible for inaugurating the monument, dedicated to nurses in Almeria in the square at Vega de Here. The square has also been given a new name, Jardines de la Enfermería.

” This fulfills a commitment that we gave to the College of Nursing to create a space so that the city of Almeria may thank the nurses for their work and the delivery of such with great professionalism. Acts like this are an opportunity to recognize the work and commitment of this professional group, always characterized by its continuous efforts to improve our society,” stated the mayor.

The monument is made ​​of Corten steel and reached more than three meters in height. The image of hands represent the nursing profession and the inscription translates: “Protecting the health of Almeria and ensuring the security of their patients, from an ethical and competent practice.”

Also at the opening ceremony of the monument was the president of the College of Nursing in Almería, Maria del Carmen del Pozo, who thanked the City Council for its recognition of nurses and expressed her pleasure. She added “Today Jardines de la Enfermería and this monument will be permanent witnesses to the important work of this group that accompanies, protects and listens to the sick.”

Do you like good food? Then you are in for a treat. head to Huercal Overa from April 11 to 13 for the Degustho Almeria Festival.

The festival will be held in the Sports Pavilion Huercal Overa, and hopes to repeat the great success of 2014. The festival’s main objectives are to promote Almeria as a brand through local produce and to position the province as a top level dining destination.

Presentations, interactive workshops, meetings with nationally recognized chefs, contests, culinary showcasing, cooking classes for children and games that combine sport with cooking are some of the events planned that make up the 2015 calendar Degustho Almería.

Alongside this, Huercal Overa town will be running a complete gastronomic week with affiliated establishments offering dishes with typical Almeriense products.

Degustho will also be a unique platform to encourage business opportunities and trade relations between companies and professionals. Children have no part in the business aspects of the food festival, so the organisers have arranged workshops and a special mini chefs contest to be held Saturday and Sunday and you can now register future budding chefs, aged 4 and 12 years, who want to get involved. Registration takes place until April 9 on the website www.degusthoalmeria.com. 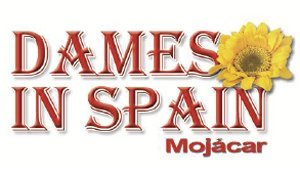 The Dames in Spain are holding their Charity Garden Party in Turre at Casa Gregory on Tuesday May 19 at noon.

It is a festive day with good food, good company, great raffle prizes and games for prizes with all proceeds going to charity. The entrance fee is €12 Which includes lunch and a drink. A selection of three individual rice and pasta dishes are being prepared paella, fideua and a curry.

A message from Arboleas town hall

The Goverment team of the Ayuntamiento de Arboleas feel satisfied and pleased with the work achieved with the Regularization of the Town Planning in Arboleas. This coming Tuesday we intend to approve PROVISIONALLY the Revision Parcial del PGOU of Arboleas. When we reach this point all of the discrepancies that had existed with the acting administrations in the urbanistic process have all been happily resolved. After this process we will send the documentation to the superior board and then after for this document of Revision to be approved DEFINITIVELY by the Comision Provincial de Urbanismo. ie Provincial Urban town planning Commision. The work that depended on the Ayuntamiento is now complete, we remain impatient waiting to say we have achieved the final result. With this document we put an end to the ordeal of 298 homes that will become fully LEGAL and also thus to conclude the process of the Urbanistic Regularization in Arboleas. There are also other important projects waiting for all our attention which we hope can be started immediately.”

MOJACAR’s Royal British Legion branch meets on the first and third Thursdays of each month, except July and August, at the artisan centre of Mojacar pueblo at 11.15am and welcomes everyone, ex services or not. The nest meeting is Thursday April 2.

Zurgena and District’s April events kick off with a Branch Meeting at Latino’s. Arrival should be at 10.30am for an 11am start and includes an Easter bonnet parade. You will also be able to purchase tickets for the buffet / pataps and drinks luncheon at Bar Camoneras on April 28.

This Wednesday (April 1) is the Sophia Wellness Centre Fund Raising Day! It all kicks off at 12.30pm and all the kids have been going round for the last couple of weeks with their sponsor forms. You have the choice of either sponsoring them per vault or just for participating. They will be vaulting as a team for 8 minutes.

They also have the Independent Theatre Group coming in to present a cheque (they raised monies at the panto from a raffle) then Nicki, Amy and Stacey will be doing two vaults each – bit of a comedy thing really. as they also have sponsors!

Then it will be time for the raffle, Sophia Wellness Centre has had many prizes donated from local businesses. Stacey Smith, who trains the young athletes said: “I have had so much support from so many people, its actually been quite emotional, I know two of the kiddies are also baking cakes to sell. Everyone has really come together, at the end of the day its about giving kids an option in regards to sport,”

Book sale at Group of Friends

The Russian museum, housing more than 400,000 works of Russian art is now open in the old Tabacalera in Malaga.

Although the doors opened for selected guests on March 25, the official opening ceremony was postponed until March 27 to allow time for the official mourning for the tragic crash in the French Alps.

The museum, in addition to the largest collection of Russian art in the world, also has a small auditorium, three cinemas, children’s workshops, a reading room with reference books and a branch of the Virtual Museum connected with more than 100 locations worldwide. These facilities offer a monthly program of lectures, films, literary readings, classical music and folklore.

Entry to the museum costs €8 for the combined ticket (permanent and temporary exhibitions) down to @€2.50 for the reduced admission to the temporary exhibition. On Sunday afternoons, from 4pm, entry is free. Entry is always free for the registered unemployed, the under 18s,  for university teachers and students of Fine Arts and Art History, museum employees and members of ICOM, and tour guides with official accreditation .

Spokesman for the Marbella government team, Félix Romero, has announced that the local government has given the green light to a proposed regulation to create the Tourism Council of Marbella, “in order to plan strategies that promote this important city sector.”

Romero continued, “this is an entity that aims to combine private initiative with the public to promote the management and promotion of tourism in the city and develop and plan strategies among different tourism sectors, through this consultative body, participation and advice.”

Romero said the Marbella Tourism Council will be chaired by the Mayor, Ángeles Muñoz, and will have the president of the Centre for Tourism Initiatives (CIT) Marbella, Juan José González, as vice president. It will also have representatives appointed by the city of Marbella and five other private sector representatives appointed by the CIT and related sub-sectors of tourism (hotels, restaurants, golf courses, health, water or commerce), creating working groups that will develop joint measures for the development of tourism.

To define these plans, five advisory clubs within the new council will also be created: hotel, gastronomic, leisure, active tourism and professional tourism. “Their goal will be to define more detailed work and promotion plans tailored to market needs,” said Romero, who explained that a total of 15 people will be involved, none of whom will receive wages.

Board members will meet twice a year formally, although extra meetings may be called when necessary. 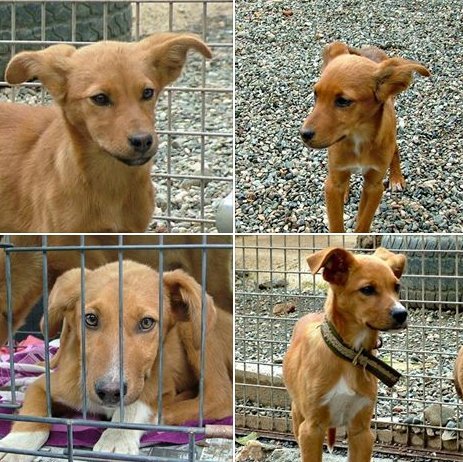 How could you not fall in love with this group of four that are looking for a forever home?

The ears are begging to be tickled, aren’t they? From left to right and top to bottom, these lab cross puppies are currently called Roxy (females), Ziggy (male), Charlie (male) and Benji (male).

These siblings are just 12 weeks old and have had their vaccinations. They have been chipped and are ready to travel although they haven’t yet been sterilised.

They are currently in Granada but are fit and healthy and would happily travel to a new home.

Would your home be enhanced by adding one or two of these fluffy buddies? If so, please contact Valle Verde Animal Rescue

Happy birthday for Tuesday March 31 to Clare Shirley who lives in Albox, Almeria with her husband Richard and their two daughters.

Happy birthday also to Rachel, based in Fuengirola, from We Love Costa del Sol who will be celebrating on Wednesday April 1.

Hope you ladies are both spoiled rotten!