Spain loves its festivals. Any excuse to congregate – to celebrate, drink, eat, laugh and stay up well into the night – is good enough for Spaniards. Throughout the year, the country hosts innumerable festivals, big and small, to celebrate everything from wine and music to the Saints and holy days. This article focuses on just three Spanish must-see festivals this spring (2020). 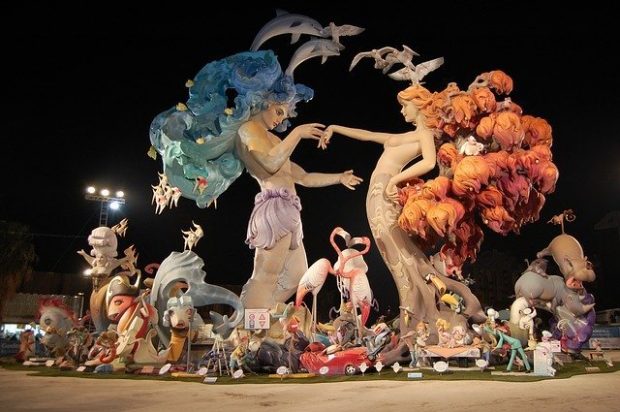 Spring is an especially fruitful time for Spanish festivals. As the mild winter slowly gives way to sunshine and new life, Spain takes to the streets and festival-grounds to herald in the season. Every region, city and even small town has its own unique spring festivals, and experiencing them all would be near impossible.

To that end, this article has zeroed in on three of the must-see spring festivals in Spain. If you live in Spain, you’ll doubtless have heard of them, but if you’re visiting this spring, hopefully you find something here that piques your interest. Before you come, learn more about the best vacation deals to Spain and book irresistible hotels near these action-packed, important festivals.

Perhaps Spain’s best-known spring festival – certainly its most boisterous – is Las Fallas (or, the Falles) in Valencia. A traditional commemoration of Saint Joseph, the festival has major historical significance, even making UNESCO’s list of events of intangible cultural heritage. But the real reason Valencianos – and numerous foreigners – flock to Las Fallas is for the large, ornate monuments that flood the city.

Attracting artists from all over the world, Las Fallas is an exhibition of grand paper-mâché monuments, ranging from regal sculptures to broad caricatures. The spectacle garners a massive crowd around Valencia’s City Hall, complete with fireworks, brass bands, costumed processions and plenty of partying.

The Feria De Abril de Sevilla literally translates to: “The April Fair of Seville”. Every April, the Andalusian capital constructs a massive fairground of tents, where local clubs and communities gather to ring in the season with plenty of food, sherry wine and dancing.

Each day of the seven-day festival begins with a parade of horse-drawn carriages through the streets, before the city settles in for an evening of partying. If you’re an outgoing traveller (or even if you’re not!) you’ll assuredly be pulled into one of the many lively tents to share drinks and food with the locals. That’s about as Spanish as this country gets!

Luckily for tourists, spring travel deals to Madrid are frequent. All you need to do is check out the curated travel deals from Travelzoo and pick the deal that feels right for you. Don’t worry about booking far in advance either, because Travelzoo’s last-minute travel deals are always perfectly priced.

Travelling to a festival is one of the finest ways to see Spain, especially in the spring. You get to see the cities come alive with merriment, get to sample the best local food and wine, and perhaps even make a few new friends along the way!